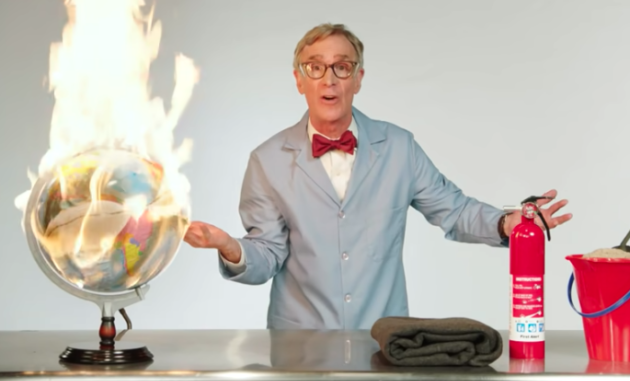 On Monday, May 13, Bill Nye informed viewers of the “Last Week Tonight With John Oliver” that our world is in major trouble due to the effects of climate change and if we do not do something about it soon, we are all pretty much screwed. Nye used a large amount of profanity to to get the message across to millennials hoping they would better understand the seriousness of the video and really think about the future and how we can be more educated on what we can do to prevent this.

In the video Bill Nye says – summed up in a cleaner version – “By the end of this century, if temperatures keep rising, the average temperature on Earth could go up another 7 to 14 degrees Fahrenheit. What I’m saying is, the planet’s on [expletive] fire. I didn’t mind explaining photosynthesis to you when you were 12, but you’re adults now. This is an actual crisis — got it?”

“I thought the video was super funny to watch, but at the same time it really made me think, and we really are screwed if we don’t do something about this soon,” senior Kian Monshietehadi said.

Bill Nye made it very clear that preventing and/or slowing down climate change is not free and is going to take a lot of work. In the video he tells his viewers that they need to grow up and make tough choices. He talks about how we need to reduce the use of carbon emissions which are caused by activities such as driving our cars and burning coal. The greenhouse gases produced by these certain emissions trap heat in the atmosphere and cause the planet to warm up, ocean levels to rise when glaciers melt, and hurricane and storm intensity to increase.

“I think this video was a brilliant idea to get the message across that climate change is real and we need to take it seriously,” senior Brooke Lopez said.

Link to video below.