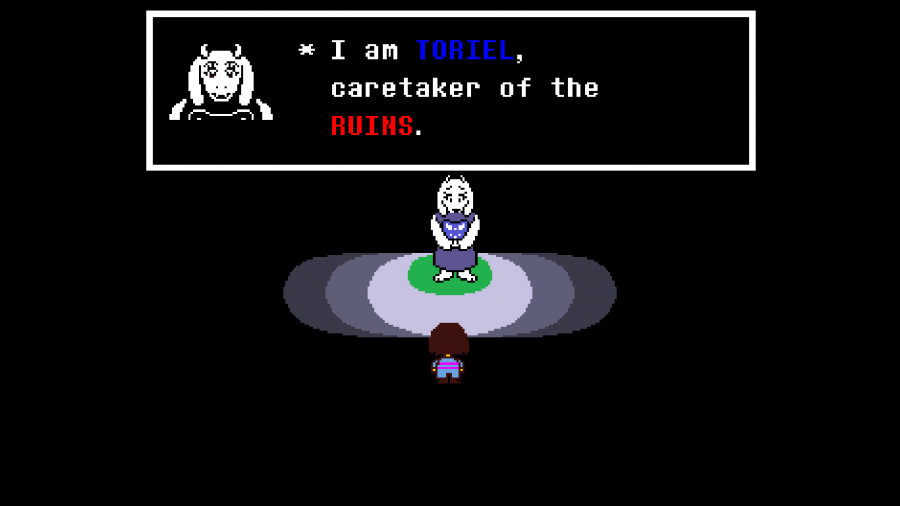 The world of video games has been taken by storm by one title that completely knocks over the way people see how games can be played.

This game, Undertale, is a story about a child who falls underground into the world of the humans’ worst enemy: the Monsters. In the game, you have try to find a way to escape the underground, and meet several characters and enemies along the way who want to prevent you from escaping. Initially, the game appears very standard, but in a short amount of time, it changes dramatically. 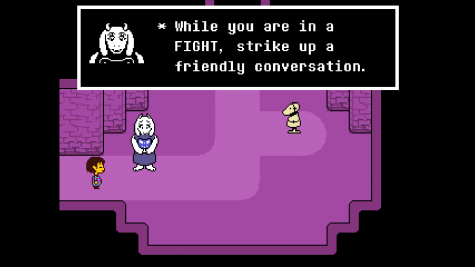 The first Monster you meet is a motherly figure who calls herself Toriel. She promises to take care of you now that you are in the Ruins, her part of the underground. She tells you that you must stay here because a protective barrier surrounds the underground that keeps the Monsters, and in this case, stops you from leaving it.

The game is soon introduced as a sort of RPG–a game where battles are based around turns (think of Pokemon)–riddled with puzzles for you to solve. What makes the game unique is the way that it treats these battles.

The game gives you the option to either fight your opponent or take it down with force, or do something to try and win it over, so much so that it won’t want to fight you anymore. 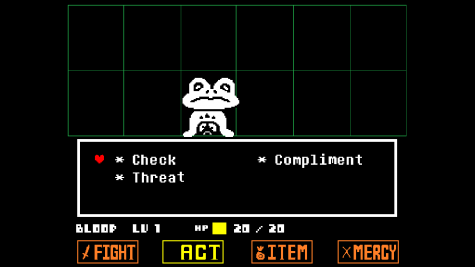 Taking certain actions will grant you the option to Spare an enemy, meaning you don’t actually fight it. For instance, using the Compliment action on the frog will make it like you and no longer want to fight.

Whether or not you spare or kill certain enemies determines the outcome of the game. That’s right, the actual ending of the game changes based on which enemies you spare, and which ones you kill. Which makes sense, killing a pivotal character in a story will definitely change which way the story will go.

Because of this, the game and it’s characters are constantly changing. If doing one thing in a particular play-through introduces an important character for one story-line, doing the opposite will take the game a completely different direction. The most significant example of this is in the eventual fight with the Monster who takes care of you for the short time you are with her, Toriel herself.

To avoid fighting her, you have to simply do nothing 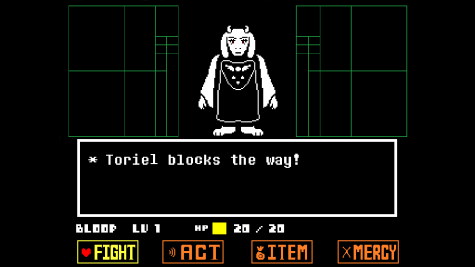 and wait for her to give up in fear of hurting you. After this, she lets you leave to explore the rest of the underground and try to escape. However, in fighting and defeating her, the way future characters treat you is vastly different. Their opinion of you changes, and they may not  be as helpful to you as they might have been if you did not fight her.

The game, even as just a game without all of it’s artsy and emotional elements, is fantastic soley due to its originality and storytelling. But what gives the game it’s charm and in-depth involvement are these elements. You find yourself not wanting to take certain actions because of how they’ll affect the characters, and find yourself hard-pressed when you know you have to do something you don’t want to do. Undertale creates a experience for the player, and a very powerful one at that.