Last year’s presidential election brought up many theories and questions on the validity of Hillary Clinton as a political figure and as a person.

While the Obama administration was in power, Clinton was able to evade justice through her persuasion of the media and her connections in the Department of Justice. Despite her questionable past, she has remained at the top of the political and social spectrum by being a seasoned politician.

But not anymore, it is time for her to rest behind bars like the criminal she is.

Her astounding record of scandals, treasonous activity, and flat-out lies have attracted a large fanbase of brainwashed liberals who do not understand how terrible and sinister the REAL Hillary Clinton is. Her list of screw-ups is never ending, but it does have a beginning, and one of her most criminal mistakes as Secretary of State is her use of an illegal personal email server to share classified documents, compromising the security of all American citizens. This is just one of her acts of treason while in power.

But not only did she compromise national security, she later lied about it to the FBI and Congress, when called out for her actions. Now these emails alone couldn’t be enough to throw someone with such power into prison, but when these emails were resurfaced by WikiLeaks, the content of these emails was plain scary, and after seeing that she approved military arms to go to known radical terrorist groups in the Middle East, it is amazing to think anyone could still roll with such a immoral human being.

Now, enough with her gracefulness as Secretary of State. Let’s address her leadership in the least corrupt company in America; one where a $100,000 “donation” is required to just meet with the head of the Clinton Foundation: Bill Clinton. Who the hell would pay to meet with a former president who cheated on his wife (Hillary Clinton) with a much younger woman, who happened to be his secretary? Nice work Bill, I couldn’t imagine staying true to someone like that who is so mischievous either. Anyways, The Clinton Foundation is built on lies and scandals. The FBI is currently investigating the Clinton Foundation for “Pay to Play” activities that include billions and billions of dollars from both domestic and foreign “donations’ that helped Clinton and her husband get access to contracts and influence in government policies. 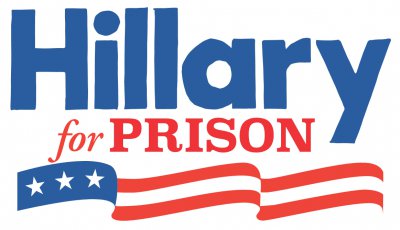 After hearing these facts and relating them to his life at home, San Clemente High School senior Connor Haddad exclaimed, “Hillary is disgusting, she has torn my family apart, and soon, she will do the same to our beloved country.” Haddad has had a troubling last year as both sides of the political spectrum are represented in his house and political arguments and debates have plagued their family conversations.

It is surprising that neither one of the Clintons have been indicted for their treason yet, but it is understandable, as it is not unknown that our political and civic institutions have influenced because of the misguided loyalty Clinton demands. Well Clinton, I see through you and your fake life. I will expose the truth and by then there will be nothing you can do about it.

2 Comments on Why Hillary Should be in Prison