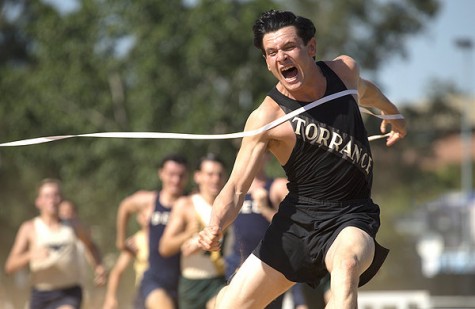 Unbroken is directed by Angelina Jolie and is rated pg-13 for the intense scenes of brutality and the occasional display of rough language, which is necessary when telling the true story of Zamperini’s life as a World War II war hero and Olympian. The film is truly inspiring because of Zamperini’s will to survive in a fatal plane crash and barely struggling through as a prisoner of war in Japan.

Jack O’Connell’s performance as Louie was extremely well done as his character had many anguished grimaces and screams of violent elation that would have been unconvincing if not dragged deeply into his soul. O’Connell, as well as Domhnall Gleeson and Finn Wittrock, dieted for months to appear as depleted as their characters which helped make the scene more inspiring. They would also spend hours filming their raft scenes, sometimes deprived of food or water, in the hopes of capturing the perfect take.

Angelina, who was close friends with Zamperini, was dedicated to doing an amazing job showing Zamperini’s internal struggles with himself as well as the external obstacles working against him. The external obstacles, such as “The Bird”, whose sole focus in his life was to make Zamperini know who was in charge at the concentration/work camps, and also his struggles as a teenager during the times of the Great Depression. Throughout the movie you see Louis overcome and 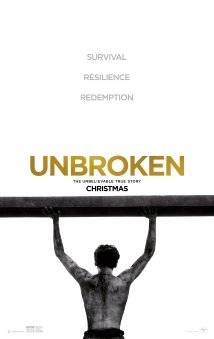 survive his problems and you leave with a strong sense of inspiration.

In the filming of the aviation scenes, the airplanes are noticeably computer-generated but they still looked quite real, due in large part to the cinematography of Roger Deakins. In addition, the scope of the scenes was so grand and large in scale with thousands of extras all contributing to make the scenes feel realistic.

However, Unbroken in my opinion focuses too much on Zamperini’s story throughout the war leaving the audience to feel depressed. If the movie ended with more details about his life when he gets back home and happily reunites with his family the viewers would leave with more closure.