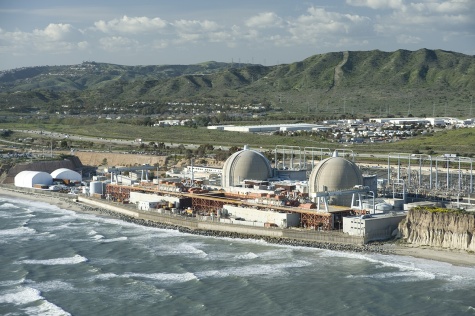 This is the seventh year that Mrs.Kerr has taken her students to the San Onofre Nuclear Generation System (SONGS).

¨I wanted to take my students to clear the misconceptions with nuclear power and long term waste programs,” said San Clemente High School teacher Mrs. Kerr. “I wanted my students to talk to the experts and be informed instead of following the propaganda from the media.”

Once students arrived, they were nicely greeted by the Decommissioning San Onofre Power Plant crew and given lanyards with their identification. The students entered through the turnstiles, and all of the safety rules were explained while carefully walking down toward the plant.

The decommissioning SONGS crew had many stations set up all around the power plant to explain how the plant worked and the safety measures they had for the workers and community. They first debriefed all of the students in a large room with a power point explaining safety measures, they then began to explore all of the stations in groups with their guide.

One of the stations talked about radioactivity, how it is measured, what stops radiation, and the different types of radiation including: alpha, beta, and gamma. The speaker showed the students what everyday objects were radioactive including bananas and some types of pottery.

Outside the debriefing room there were two more stations. One of them talked about the uranium and boron rods used to make heat in the reactor. He explained how the uranium is actually a black pellet placed inside the rods, not green goo that is portrayed in the movies. He did admit that once the uranium is used that it does give off a faint blue light from the energy. The second station talked about how the plant uses the water they take from the ocean for cooling.

“I thought the station about the cooling pipes was really cool,” SCHS junior Hayden Hall said. “I didn’t realize how big they were and how much water they took in to cool the power plant.”

“My favorite station was security because I didn’t realize how difficult it would be for anyone to attack the plant,” SCHS junior Aidan Flynn said. “It made me feel safe and reassured.”

After leaving that area, students arrived at the social media station and were informed on some of the hoaxes of the plant. He explained how reinforced the reactor area was and showed the students some of the reinforced metals used to protect the reactor.

After leaving the students got a view of the holding tanks for the used waste. Students got to hold the reinforced rebar used to protect the waste.

The final station before leaving was the station about power lines and how to respond if there was a fallen power line near you. They showed us how energy travels through the power lines and how the energy’s main desire is to “travel to the ground.” Once they turned on the model of a street with a fallen power line after a car had hit it, the speaker carefully moved a model person toward the car, but then all of a sudden a bright rod of sparking electricity made a loud noise and traveled to the model person. This portrayed that the person had just been electrocuted. It was very eye opening for the students and a wonderful educational moment on safety.

The students left the plant feeling more assured about living so close to a nuclear power plant.