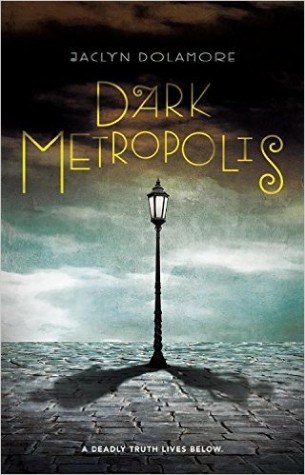 In the sinister fantasy/adventure novel, Dark Metropolis by Jaclyn Dolamore, main character Thea Holder is the sixteen year-old daughter of a woman afflicted with bound-sickness: a result of her illegal marriage to Thea’s father, Henry Holder. The day Thea and her mother were informed about the death of Henry, Thea’s mother lost interest in the things she used to enjoy and began to insist that Henry was alive, for she could still feel him, yet had no reasoning or evidence to support her irrational claim.

Thea devotes her time to waitressing at the glamorous Telephone Club, where ostentatious socialites spend time laughing and gossiping over drinks and leaving the occasional overly generous tip. With her father presumed dead after the bloody Battle of Vonn and her mother left in a state of depression, a symptom of the bound-sickness, it’s up to Thea to keep the roof over their heads and care for her incompetent mother.

In this post-war dystopian world, people have a tendency to go missing, leaving friends and family filled with heart-ache over the inexplicable absence of their loved ones. Little do they know that Freddy, a young, silver-haired patron of the Telephone Club and admirer of Thea, is restoring corpses to life while stealing away the memories of their past lives at the command of Gerik, the closest thing Freddy had to a father, and his cold Uncle Valkenrath. Freddy is kept in the dark as to what becomes of the corpses after they are restored to life, he only knows that he should feel obligated to use the gift he was born with.

Not long after meeting Freddy, Thea’s best friend, Nan, goes missing. As Thea and Freddy grow close and Thea begins to confide in Freddy, they begin to realize that something is wrong—these missing bodies, restored to life, can not be a good thing. And their government is hiding something.

Thea and Freddy find themselves swept up in a revolution long in the making, led by Father Gruneman and Arabella von Kaspar, who struggle for power over the revolutionaries and argue over the best way to address the issue at hand.

As the novel progresses, blood is shed and truth comes to light. One can expect to find answers, and more questions, in reading Dolamore’s sequel, Glittering Shadows.

Overall, I found this YA novel to be a far more exciting read than others I have encountered, because of its well thought-out, complex plot and unique twist on dystopian society. Fans of Cassandra Clare will particularly relish this novel, yet I highly recommend it to all.