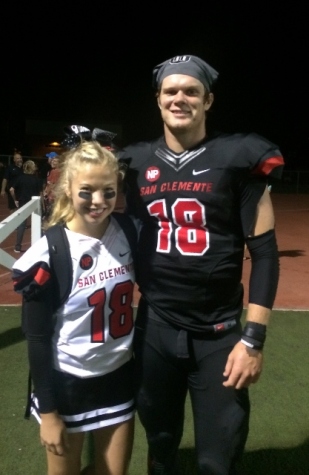 SAN CLEMENTE — He may be the star of the San Clemente High School Football team, but he still relies on his mom to wake up him up every day.

His Friday morning routine was fairly normal despite the immense pressure of his upcoming evening: a game against our rival Dana Hills. The pressure was made even more intense seeing as last year’s loss was defended by the sentiment well Sam Darnold was hurt.

Before heading off to school Darnold satisfied his empty stomach with a egg and sausage breakfast burrito topped off with Cholula Hot Sauce and washed down with a glass of fresh guava juice.

He left his house at 7:25 in an attempt to beat morning traffic. The school day passed quickly for Darnold and at 12:04 he rushed out of his Advanced Composition class with Mrs. Lewis to eat lunch at home, one of the perks of not having a fifth period. He usually takes a power nap after lunch, but he omits this part of his daily routine on game days.

Darnold instead plays Fifa to pass the time before his team pre-game meal at 2:15 at Zona’s Italian Ameircan Cusine where he gorges out on carbs to fuel him for the game. After that he headed home “to chill” for an hour until he had to be back at the high school.

Darnold went on to prove who the real master of the sea is by leading the Tritons to a 49-21 win over the Dana Hills Dolphins. His victory routine was as simple as his morning routine: he spends a few minutes talking to reporters and taking a few pictures with teammates before hugging his girlfriend and varsity cheerleader, senior Summer Thompson, and walking her off the field.

He finished off his successful night with a sandwich from Rose’s Donuts and then got snug in his bed while visions of dead dolphins swam through his head. He left the rest of San Clemente thankful for another great win, reaffirming the mantra praised by the loyal Triton fans: In Darnold We Trust.

1 Comment on A Day in the Life of – High School Quarterback: Sam Darnold