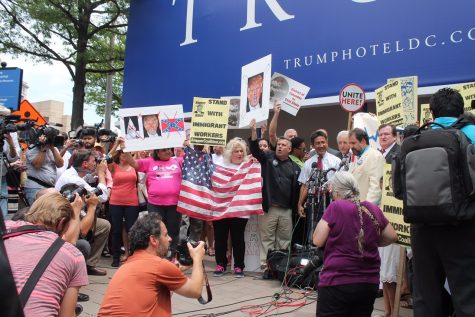 Tuesday night, the world watched in awe, and I, like many, in fear.

Just that morning, I had been filled with hope for the future of our country. The legacy of diversity, acceptance, and stewardship established over the past eight years seemed ready to bound into another term and give promise to our nation.

Then, suddenly, it didn’t.

That night, and nearly every night since, I cried. I cried for our country, for our world, for all people across the globe facing discrimination, for our planet, for our lives.

In the past few days, I have heard many say this same thing. I have heard them say that protesting the new president-elect will mean nothing–will accomplish nothing.

But I also understand that we cannot grow complacent. We cannot simply run away from our problems and migrate to other countries because we are disillusioned with our own. We cannot just readily accept this fate of bigotry and hatefulness and move silently on with our lives. We cannot go quietly. We cannot be the silent majority.

We must make our voices heard. We must make it clear that we will not go quietly even though it might seem as if we can’t do anything. We must not bow our heads and let intolerance and discrimination engulf our virtuous nation. We must fight.

This election, we had one of the all-time low voter turnouts in history with only 55% of eligible citizens casting their ballots. Even during our highest year in history, only 64% of those who could vote chose to participate in the democratic process.

According to Sophia Noble, a junior at San Clemente High School, “some couldn’t relate to either candidate’s opinions and decided not to vote altogether.”

Even some of those who voted seemed to disregard their obligations as citizens of the United States with nearly 11,000 of them writing in “Harambe” on their ballots.

While there remains no way of knowing if increased voter turnout would have changed the results of the election, we can gather one thing from this: we, as a nation, have grown too apathetic about the fate of our country.

Let this be a wake-up call to humanity.

Many are hopeful that perhaps this next presidency won’t be as horrible and foreboding as it seems now. And perhaps it won’t be.

Even at its mildest, the next era of our nation will be trying. It will test us. It will challenge our values. It will be taxing. It will be, at times, ugly. It will threaten some of the great moral gains we have made over the past few years.

As Hillary Clinton urged when she conceded the race to her opponent, “let us have faith in each other, let us not grow weary, let us not lose heart, for there are more seasons to come. And there is more work to do.”