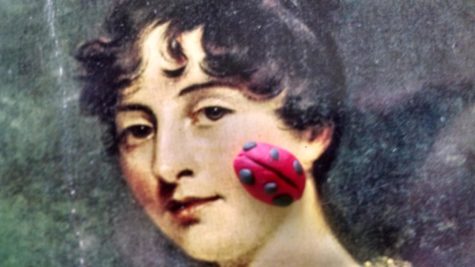 She always desired a ladybug of her own. When she first saw one crawling about a boy’s books in her history class, she said pleadingly “I want it!”, and later reproached him for his intentions to kill it. A relatively frivolous circumstance to most, but it was one that I took to heart thereafter.

Her birthday was the 5th of October, and since I felt within me an indefatigable love for her, I thought it a matter of course to fulfill her intrinsic demand. Over the summer, when school was let out, I made a sort of queer necklace for her, with an inordinately long silver watch chain fastened together and a fob in the shape of a ladybug clipped on, for it was impossible for me to procure a live ladybug for her amusement as it was for the insect itself to last a day within her unscrupulous clutches. I was somewhat proud of it when it was finished, though it didn’t resemble anything bought in a shop at all, and when the school year was start up once again, I made sure that the day of her birth would be known by everyone and that she, in some way or other, would be happy. I posted a notice stating that it was her eighteenth in the centre of the school campus, had her name called and her birthday noted over the loudspeaker, and presented to her my gift by means of mutual friends. Once this was done, I thought that all that was left to do was to wait for a jubilant response from her; though, in truth, I hoped that I would never receive one. As the weeks went by, her appearance on campus became less frequent, and I was all but indifferent; that was, of course, until one day when I saw her at the school library, facing me, the necklace rakishly about her neck.

I winced , and thence received a vision; a vision of Hell.