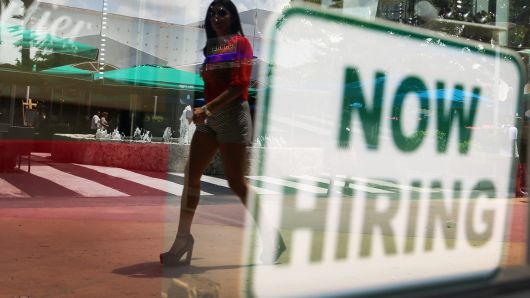 Unemployment rates fell 0.2% to 3.7% this September, the lowest unemployment rate since October 1969. After a huge growth in unemployment during the economic recession of 2008, rates are returning to extremely low numbers. Being at a nearly 50 year low for unemployment is a huge indicator that the American economy is performing well, but could signify economic hardship in the coming future.

Experts attribute the increasingly strong American economy to the “laissez-faire” economic policies of the Trump Administration. Tax cuts and rollback of regulation has stimulated big business which in turn has raised the demand for workers, lowering the unemployment rate. While limiting government’s role in the economy is proving to be effective temporarily, it could prove to be counterproductive should there be a market crash. Nevertheless, American consumers and workers are enjoying the growing economy. Even San Clemente High School students have begun to notice the improving job market. San Clemente High School senior Sofie Sarpa said, “I’ve noticed all of my friends have jobs now. I’m gonna start looking for a job too.”

Low unemployment rates have the added benefit of leading to higher wages as well. Because more businesses are hiring, the pool of qualified candidates they can pick from becomes smaller, leading to an inflation of salaries. But lower unemployment rates can signal a slowdown of the economy too.

In 1970, one year after the last time rates were this low, the economy faced a recession lasting about a year. In that scenario, the Federal Reserve System continued to raise interest rates in response to skyrocketing inflation because there was so much money flowing through the economy. This year’s economic growth could be closing in on a recession if history were to repeat itself. There is already evidence to suggest a market crash is coming. Wednesday, October 10th saw the largest drop in the Dow Jones Industrial Average—a stock market index that shows how 30 large, publicly owned companies based in the United States have traded—since 2000.

Experts are warning consumers to watch for an incoming recession as America has been in the longest streak of economic growth in decades.