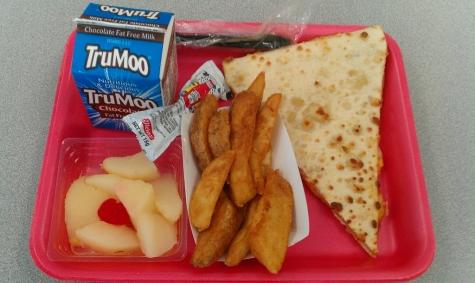 Upon researching about school meals and their standards I was shocked to find out  that the average school meal is actually less nutritious than the average prison meal in the United States.

According to a popular info graphic created by The Daily Meal, an online news journal about food and meal quality, prison meals in comparison to school meals have a higher meal quality and is tested approximately five or ten times more for impurities than school lunches.

A recent survey at SCHS shows that approximately 90% of the polled students avoid buying a school lunch more than once a week. Many that do end up ordering school lunches are usually doing so because they do not having anything else to eat. Another problem with the school meals is that it at many times can actually be worse than not eating at all due to an almost inexistence of vitamins and nutrients.

The abomination which is school lunches expands beyond the rubber burritos and the plastic pizzas. The only beverage they offer as part of the meal is a diluted chocolate milk. I have personally tried not to drink them anymore as so have many other students due to the fact it lacks in taste and seems expired half the time. If you would like to drink water you would either have to go to the rusted water fountains or buy a bottle of water separately.

“I haven’t had school lunches in years because I care for my health, I mean they don’t even offer any water with your meal” said Dominic Brousard, a graduating student at SCHS.

The poor food and the lack of quality of school lunches can be attributed to the lack of funding that districts are given to serve their students food. Many of these issues stem from many students being low-income and in need of a meal while at school at little or no cost. But the food that is being served has little to no nutritional value and rarely fills students up.

Senior Korynn Marsh believes, “If the school spent a little more money on their meals and gave us decent food I would consider eating a school lunch.”

Research shows that in a majority of school foods the meat that is being used is tested five to ten times less than the meat being served at fast food chains such as McDonalds and Burger King. This shows that not only is the quality irrelevant to those making the meals but also that they do not mind if the quality of meat is sub-par to virtually inedible.

As senior Tyler Ankrom stated, “The school lunches are so bad they would make fast food places look like elegant restaurants.”

School lunches being served across the United States are one of the worst meals to feed ‘the future of the nation’ as they are loaded with tons of fat, carbohydrates, and salt, leaving students bloated and malnourished to save a few cents on the dollar.