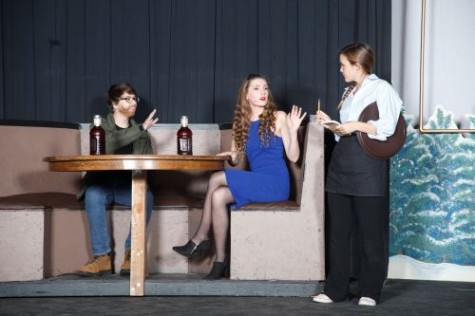 Almost, Maine, a play put on by our own San Clemente Tritons, is about the ups and downs of love. The play takes place in a small town Almost in northern Maine at nine o’clock on a cold Friday night. It begins with reoccurring characters Pete (freshman Noah Willis) and Ginette (sophomore Anne Combs) who have been dating for a while and have trouble confessing their feelings for each other.

Scene 1, “Her Heart” begins with a troubled girl named Glory (senior Danielle Pribyl) carrying her broken heart in a paper bag who came to pay her respects to her dead husband West, during the Northern Lights. East (senior Matt McCoy), a repairman comes, out of his house to find a strange woman camped in his front yard. The two begin to talk and East quickly fell in love with her. When she rejected his many attempts to kiss her he vowed he would put her broken heart back together. 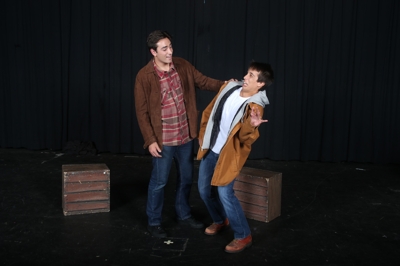 Scene 2, “Sad and Glad” introduces Jimmy (junior Joshua Palvis) and Sandrine (sophomore Julia Becker), two ex-lovers, who run into each other at a bar. When Jimmy tries to reconnect their love Sandrine confesses she is engaged and is attending her bachelorette party. Sandrine notices that Jimmy has gotten a tattoo that reads “Villian”, when she asks him who Villian is he tells her it was meant to be Villain because he broke her heart and wanted to warn other girls of his villain side. Sandrine leaves Jimmy by himself and a waitress(sophomore Delaney Marchant) approaches him and introduces herself as Villian.

Scene 3, “This Hurts” focuses on Steve (senior Colin Horan) and Marvalyn (senior Korina Camel) who meet in the laundry room when Marvalyn accidently hits Steve with an ironing board. Marvalyn was confused when Steve confessed he could not feel pain, and tried to point out to him that it was unusual. Steve worriedly stated that he did not think that he could ever fall in love because of his condition. In the end Marvalyn accidently hits Steve again and he finally feels the pain causing them to fall in love.

Scene 4, “Getting it Back” takes place in Lendall’s (senior Draco Tudor) apartment when Gayle (senior Paris Hull) is giving back all the love he ever gave her. After bringing in dozens of bags stuffed full of love she asks for all the love she ever gave him back and suggests they break up. When receives her love back she sees it is much smaller than all the love Lendall gave her. Confused Gayle asked where all the love she gave him was because she was sure it was not all. Lendall confesses he traded her love in for a ring and proposes to her.

Scene 5, “They Fell” shows Randy (junior William Wakeman) and Chad (senior Daniel Klevit) sitting by a campfire talking about their relationships with their girlfriends. Chad tells Randy that it would be easier if they just loved each other because they were best friends and never argued. All the sudden Chad falls and confesses to Randy that he had just fallen in love with him. Randy at first freaks out and does not feel the same way, but eventually falls in love with him too.

Scene 6, “Where it Went” concentrates on Marci (junior Sophia Racke) and Phil (senior Evan Harris), a married couple who no longer can find time for each other. Phil cannot understand why Marci is so upset but believes it is because she lost her shoe. After discussing the issue Marci blurts out that it is their anniversary and he has forgotten it. The scene ends with Marci angrily walking to the car and her shoe falling from a tree right in front of Phil.

Scene 7, “Story of Hope” shows Hope (senior Sabrina Poei) arriving at a Mans (sophomore Geoffrey Osuna) house late at night searching for the man she once loved. Once she knocks on the door a man opens it and she begins to pour her heart out to him. Not recognizing him she tells him she wishes she would have said yes to his proposal. He tells her that he is the man she is looking for and as they are about to kiss the man’s wife calls for him and Hope runs away.

Scene 8, “Seeing the Thing” introduces Dave (senior Jonathan Crawford) and Rhonda (senior Ruthie Flynn) who arriving to Rhonda’s house. Dave gives Rhonda a painting that you have to find the image yourself. Rhonda tries to see the image but fails just Dave fails at his attempt to kiss Rhonda. When Dave explains to Rhonda how he feels about her she expresses to him she had never loved anyone before. Finally Rhonda allows Dave to kiss her and she sees the image in the painting. To end the scene Rhonda and Dave disappear into her house to take the next step in their new relationship

To end the play we go back to where we started with Pete and Ginette, the couple who had trouble confessing their love for each other. They finally confess their love to each other and the curtains close.

Almost, Maine was a great choice to start off Mr.Ingram’s directing career at SCHS. Many people had great things to say about it including those who took part in putting on the show. “Almost, Maine was such a wonderful production! Thanks to everyone in the cast and crew, you were all great!”