Indian villagers have been throwing firebombs at elephants and calves to send them away from human settlement. While the photos have been taken over a number of years, they precisely illustrate the developing turmoil between humans and elephants that are driven out of their homes by human impact–in this case, by deforestation.

These photos were taken in West Bengal by photographic artist Biplab Hamza and detail the incredible lengths that a few inhabitants will go to stop the elephants from harming their crops and property.

The mother elephant and calf can be seen stumbling into a street to dodge the flares from the firebombs being heaved at them by a group of local villagers. In different images, individuals can be seen hurling stones at a crowd of wandering elephants that have crossed into their local area.

Now and again, the elephants are assaulted in their own habitat. Disheartening photographs report elephants battling to cross a rail route line that had been constructed directly through their home.

Due to the obliteration of the elephant’s natural environment by deforestation, some elephants are forced to intrude on human populated land. Instances of aggression towards the animals–like depicted in these photos–are becoming more typical as elephants come into contact with townspeople and their property increasingly often.

While the firebombing occurrences are severe motives to turn away the animals, pictures additionally depict other methods to rid their land of the creatures, from tossing stones and flourishing bright lights to charging the elephants to scare them off. 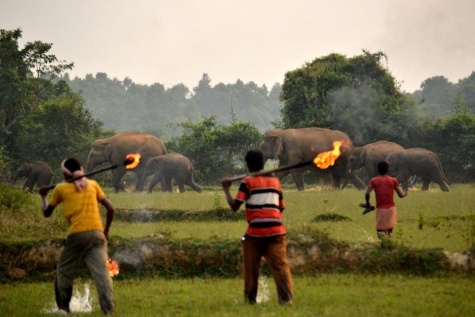 Hamza trusts that his photos will bring issues to light of the situation of the elephants. “This happens because the villagers have to save their crops. There are many elephant corridors in human habitations,” Hamza said. “I try to show and spread my photos to increase public awareness on the matter.”

The Australian Broadcast Corporation announced that 70 individuals died in the Indian province of Assam a year ago due to the ceaseless animal-human conflicts.

According to Fox News, similar numbers of elephants have passed on as well due to human assaults, getting hit by trains, and even getting shocked by electrical cables.

Indian elephants are recorded as jeopardized by the International Union for Conservation of Nature (IUCN) as their population declined by over 50% since the 1940’s–driving them nearer to being labeled extinct.

Regardless of how many individuals attempt to drive away these elephants from their harvests, an elephant’s excrement is a significant factor in spreading developing seeds and assumes a significant part in the woods and meadows, as indicated from a report by Harry Cockburn for the Independent.

India’s roaring human populace and mushrooming towns and urban communities have seen forests decrease to become disengaged islands, and when animals try to move between them, they tend to collide with the people rather than moving through unnoticed.