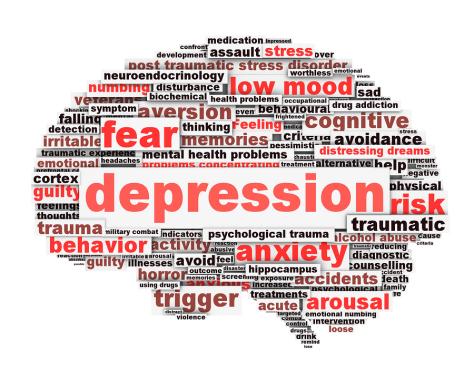 Depression (noun): a psycho-neurotic or psychotic disorder marked especially by sadness, inactivity, difficulty in thinking and concentration, a significant increase or decrease in appetite and time spent sleeping, feelings of dejection and hopelessness, and sometimes suicidal tendencies.

I was diagnosed with severe depression two years ago after the traumatic events that took place in my life sent me on a downhill spiral.

Recently, I’ve seen websites like Tumblr and Instagram glamorize the idea of mental illnesses making them seem that if you had one you were “lucky” because you are more sensitive or that you have more challenges to overcome, making you stronger in the end.  However that’s just not the case. Having a mental illness like depression, or any mental illness, is a chemical imbalance in your brain and makes you an outsider.

When you tell someone you have depression, if you ever do, their reaction is always the same. Pity.

When you try to talk to them how you feel. Pity.

When you cry your eyes out in front of them. Pity.

You can cry to your friends and family about how terrible you feel however they will think you’re over reacting because they just don’t understand. You feel like no one understands you so you just lock all your emotions and feelings up until you feel numb. And let me tell you feeling numb, although its taking the easy way out, it makes everything worse as soon as something bad happens and the flood of sadness is released.

Another thing about depression is that you try to stray from the idea that everything in your life is a mess; but eventually you wake up to the reality that it’s not, and the tears come pouring out. I know what depression feels like, you feel numb and anxious and you’re hopeless of the future.

People will tell you over and over that “it will get better” but in your mind you don’t ever see it getting better. You can try every single coping skill, things like: playing an instrument, listening to music, reading, going on a walk, and even calling someone but sometimes none of it works. And when none of it works you hide away from everyone, you don’t go out anymore, you don’t text people, you don’t want to do anything but stay in your bed with the doors locked.