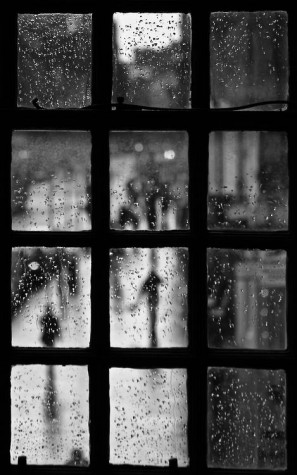 A girl sits perched on her window seat in a sparsely decorated room. The walls have been the same faded white for years, and the contents of the room sit around her, having never been moved. Layers of dust coats every inch and object, muting all traces of color. Her back is unnaturally straight, her ebony hair laid smoothly against the back of her strong shoulders. The gray light of an overcast sky seeps through the grime clinging to the window. Her gray-blue eyes never stray from the window. As light raindrops fall and trail down the window, she watches the world pass by.

A mother and daughter burst through the crisp glass doors of a well-know clothing boutique. Both look to be in their twenties with professionally styled hair and flawless makeup. Their hair falls to their waists in golden tendrils, pointing down to their sleek black stilettos. They laugh and smile and work their charm on the passersby, three shopping bags jangling on each arm and a cup of coffee in held by hands with perfectly manicured fingernails. They loiter near the door for fear of stepping out into the rain, and the daughter stomps her foot until her mother ushers her back inside the store.

A young man buses tables at the café next door, his face haggard. An older gentlemen in a pressed business suit forcefully taps on the busboy’s shoulder and holds up a cup of coffee, raising his eyebrows and saying nothing. Confusion crosses the young man’s face as he inquires what the gentleman means by doing this, and the gentleman complains of cold coffee. The young man takes the beverage and promises the gentleman a new one. The busboy walks away to ask the barista to prepare the drink while the gentleman harrumphs and settles into a seat as he watches the boy work.

A well-used SUV pulls into a spot along the curb next to the park. Two children leap out of the backseat and run toward the swingset, giggling playfully. The father steps out of the driver’s side and slams the door as the mother exits the passenger side, smiling as she watches her children. Her smile slips as her husband approaches and she bows her head. His callused hand wraps around her slim wrist and he pulls her toward the children. When she tries to pull back, his free hand twitches as his face turns ugly with rage at her defiance. He glances around at the people bustling about the park and decides to release his wife’s wrist. She pulls back, rubbing at the red mark forming, shrinking further into herself.

The girl at the window continues to watch, never flinching, her gaze never faltering, as the world continues around her.