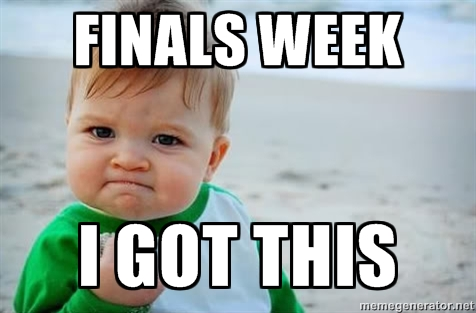 It’s that time of the year again. Finals are right around the corner. Zero period students are grateful for a week off of waking up early; however, students overall are dreading the week to come. During and before finals week students are often stressed and spend much of their time studying in the hopes of getting a good grade.

Finals can bring out the best and the worst in study habits. Often times the all-nighters and intense study groups can lead to one of two options; a complete meltdown or an “A” on that final.

Study habits are fairly malleable, as they depend on the type of student, the classes they are taking, and the grade they hope to get. It is interesting to see what type of studying works best for the different types of learning. Some people say the best way for them to get a good grade is for them to not study at all.  On the other hand most people believe that studying with groups, memorizing terms, and analyzing topics is the best way to prepare for test.

Often times students will look to the RogerHub website to determine what grade they need to get on the final exam to get a certain grade in their class.  Another important factor in the study habits of students is the long weekend right before finals week which allows students to cram a few extra hours of studying in before the overwhelming week begins.

Questions people often ask when finals come around include probing into the best study methods, the benefits of group and solo preparation, and the classes responsible for the most difficult exams. We interviewed multiple students across different grade levels to understand their study habits and their feelings about the upcoming finals week.

How do you normally study for finals?

Would you rather study in a group or alone? Why?

Which final will be your hardest? Why?

Have your study habits changed since freshman year?

Will you be spending the weekend before finals studying?

What is one thing you are worried about for finals?

What will you be doing to best prepare yourself for finals?

How do you feel about your first finals?

On average, how long will you spend studying for finals in total?