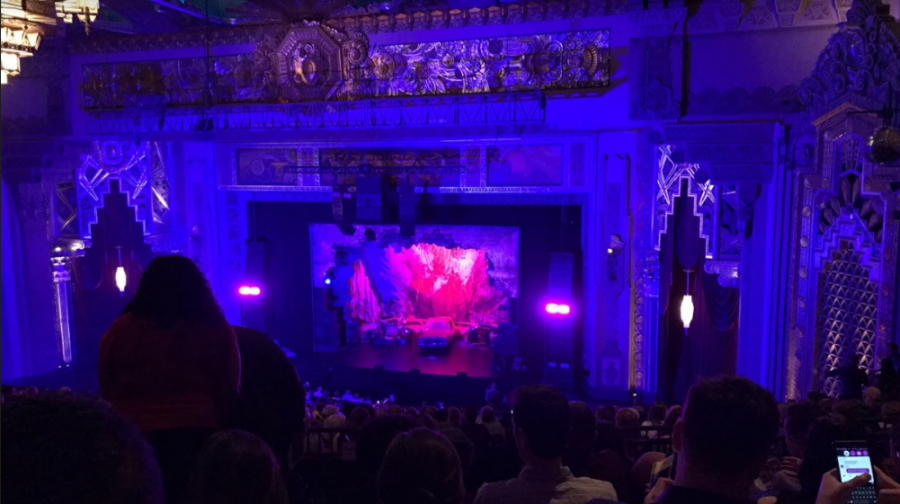 By: Saffron Sener | Editor in Chief

A compassionate and complex storyline centered on the intricacy of love, Hedwig and the Angry Inch is a one-act musical featuring an extended monologue by someone exposed to levels of humanity untouched by many.

Off-Broadway based and currently touring, Hedwig and the Angry Inch is an award winning musical that encapsulates the style of 1970s glam rock in combination with the turmoil of the 1980s. In the words of senior Baily Donlin, “This show was so good, especially since it was focused on a concept that is not widely accepted, and incorporates such amazing characters to develop it.”

Nominated for eight Tonys and winning four, as well as being bestowed a variety of other awards, this piece is applauded for its ability to not only characterize a mostly non-speaking cast, but do so with the direction of only one powerful character: Hedwig. The entire piece is recounted from their point of view; interjections from the other actors only come sporadically from Yitzhak, their husband, or when engaged.

Told amongst the ruins of a city and the remnants of a battlefield, explained as the set of the fictional musical, the Hurt Locker, Hedwig and the Angry Inch is a narrative detailing the difficult life of the genderqueer, East Berlin native, singer-songwriter Hedwig Robinson.

Born Hansel Schmidt, Hedwig grew up in a loveless home with their cold, strict mother. Their father, the “American G.I.,” had run off when Hedwig was a child. A stuffy place of severity, Hedwig’s childhood home thrived on obedience; the only divergence allocated to the young child was their access to the radio, which, though having to be listened to in the oven (so as to not irritate their mother), provided a gateway to rock and roll classics like Lou Reed, Iggy Pop, and David Bowie. This radio served as Hedwig’s lifeline between them and the rest of the world; growing up in the communist East Berlin, opportunities such as this were scarce.

One night, Hedwig’s mother slipped up in her strictness and recounted the story of the “origin of love.” In this fable, the people of the earth, moon, and sun were all that existed. Each appeared as a combination of two sexes; one pair being a man and woman, one being two women, and one being two men, all connected at the back. After becoming spiteful of the people’s joy, Zeus rained lightning upon his creations, cutting the pairs into separate people. To find one’s other half, to locate their soulmate, was to fall in love. Hedwig became entranced by this idea, and grew determined to one day reconnect with their other half.

However, by reaching age twenty-six without experiencing romance to even the slightest degree, Hedwig believed their love must be on the other side of the Berlin Wall; their other half was to be reached by bridging the gap between the sheltered East and the idolized West. This bridge was built by the American Sergeant Luther Robinson; after meeting one day in a chance encounter, the two became enthralled with each other. Hansel, disillusioned with the attention that Luther provided, agreed to marry and escape to the U.S. with him. In order to do so, though, Luther gave Hansel an ultimatum: if you want to get to the other side of the wall, you must leave something behind. To be married, Hansel had to become Hedwig; a gay marriage, especially due to the era and area, was illegal, and therefore Hansel needed to transition into womanhood. Luther bought a wig and Hansel underwent a surgery (which was botched and left an “angry inch”).

Hedwig’s dream for the U.S. was never realized. After a year, the two divorced: Luther ran off with a man he met at church, and Hedwig ended up in a trailer park in Kansas. To compound this, the Berlin Wall fell at the same time, and Hedwig was left with an ugly truth: if they had just waited a year, their sacrifice, though in the pursuit of love, would have been unnecessary. Depressed, alone, and penniless, Hedwig is desperate for any stability or self-confidence. In a powerful song entitled “Wig in a Box,” Hedwig rises like a Phoenix from the ashes of despair and betrayal and rebuilds their life by embracing their femininity and completely evolving into a female powerhouse. In conjunction with this transformation, Hedwig forms a rock band, the Angry Inch, and finally pursues their passion for music and its creation.

Everything changes, though, when Hedwig finds their other half in seventeen-year-old Tommy Speck.

To avoid spoilage, the rest will be left to mystery.

On a national tour, Hedwig and the Angry Inch is currently playing at the Pantages theater, starring Darren Criss and Lena Hall. A beautiful facility with unparalleled architecture and sophistication, the Pantages is more than perfect to house the powerful cast of this Broadway tour. Criss kills as Hedwig, exemplifying both his ability to sing in a variety of genres as well as his versatile acting repertoire. Hedwig is probably one of, if not the most, difficult roles I’ve ever seen. The sheer amount of lines, improv, lung capacity, and tenacity one must contain to even touch the character is incapacitating. Any difficulty that could be in a role, is in Hedwig: from needing to switch between accents repeatedly to an eventual shift in the character entirely, the part is challenging in all meanings of the word.

Darren not only rises to the occasion, he sets the bar.

This is matched by his mighty costar, Lena Hall, who plays Hedwig’s husband, Yitzhak. Hedwig’s backup singer, Yitzhak’s role is demanding in its own special way; the resentment and anger Yitzhak feels towards his partner must be conveyed with only a few lines in the entire musical. With an actress and singer like Lena Hall, though, this intense emotion was communicated with both ease and elegance. Hall’s unrivaled ability to belt out music of literally any type of music, whether Whitney Houston’s “I Will Always Love You” or the rock pieces of the musical itself, she is able to knock out every note. In all honesty, her range and ability left the audience in shock.

Furthermore, the show itself, in all technical aspects, was marvelous. The intense lighting brought passionate energy to the already fierce show, complementing the powerful musical numbers and meaningful moments. Costumes were perfectly matched to each character, with Hedwig’s extravagant and gaudy outfits, Yitzhak’s tough and grungy ensemble, and the band’s simple, eighties-style rock clothing. To be completely honest, though, the most breathtaking technical aspect were the projections used during the songs, “The Origin of Love” and “Exquisite Corpse.” For the first, a scrim, or thin, transparent fabric, was lowered as animations danced and depicted Hedwig’s rendition of the origin of love. For the latter, a distorted, vivid, metaphorical set of images flashed on the set. In any circumstance throughout the show, the technical facets of Hedwig and the Angry Inch were just as awe-inspiring as the performances.

Lauren Hill, a senior, explained, “Every aspect of the show added to the story. The music and lights showed Hedwig’s true feelings. The set was as bleak as Hedwig’s past. It was such a cool show because it took so many factors, such as the lights, set, and costumes, that reached even the back of the theater. It made the technicality just as important to the character development as an actor or the script.”

This particular musical, with its fast-paced plotline and storytelling perspective, can at times be hard to follow. By the second time I saw it, many new developments that were otherwise lost on me became apparent. It is necessary to pay attention at all times in order to understand what is going on. This can prove difficult, due to the strong accents possessed by each of the seven characters, but is undeniably crucial. Being that the entire plotline is told from the point of view of Hedwig, the inflection of the story, the reactions of the other characters, and the progression of the narrative is vital to comprehending the musical. In order to fully empathize with Hedwig, one must cling to each word; otherwise, the subtle emotional undertones are lost.

In all honesty, this show was the best one I’ve ever seen. I went in with no expectations, and was shocked to fall in love so easily; by the end, the audience united in demands for an encore (which we sadly did not receive). I’ve been involved with the theatre arts since seventh grade, so my exposure to musicals and plays alike is far-reaching and developed. And I am fully aware of the fact that I’ve never wanted to see a show more than once as much as I did with Hedwig and the Angry Inch.

Running until November 27th at the Pantages Theater in Los Angeles, Hedwig and the Angry Inch will next travel to the San Diego Civic Theater from November 29th to December 4th. However, Darren Criss and Lena Hall will not be following the tour there, so I recommend hitting up the Pantages while you can; their vocal abilities are unrivaled and bring untouchable emotionality to the show. To put it bluntly: their performances should not be missed.

Hope you can make it to the theater!