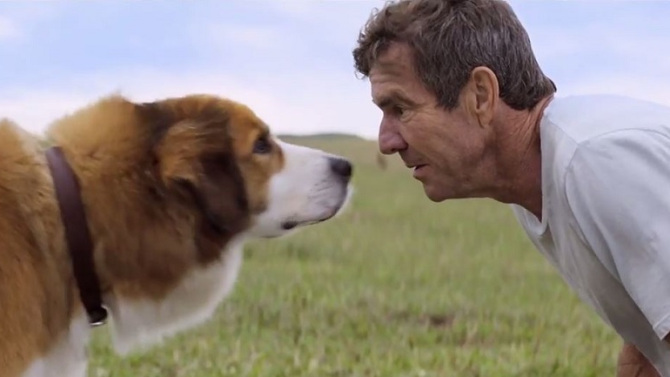 A Dog’s Purpose, directed by Lasse Hallstrom, was sure to be an instant hit, attracting dog-lovers and sappy moviegoers alike. Based on the novel by W. Bruce Cameron, this movie carries you through several lives of a dog that is continuously reincarnated. However, there seem to be some mixed emotions about this tearjerking cliche.

Before this movie was even released, there was controversy brought to light by a disturbing video released by TMZ. This problematic clip shows a German Shepard being forced to enter rapid waters to shoot a scene, clearly frightened. Despite his efforts to avoid going over the edge, filmmakers and trainers continued to try and coax him into the water, and eventually pushed him in. Many argue this scene was unnecessary for the movie, and could’ve been easily avoided. Inevitably, PETA took action and called for a boycott against this movie, even organizing protests, and Universal Pictures cancelled the film’s scheduled premiere.

Although actor Dennis Quaid claims that there was no animal abuse that took place while shooting, many people are still outraged by the scene. A Senior at San Clemente High School, Naomi Wilhite, says “After seeing the video of the German Shepard, I can’t imagine what else the dogs had to go through in order film this movie. A dog isn’t an actor; when he looks scared, it’s because he’s genuinely scared” she added “This whole thing made the movie less enjoyable to watch.” Expected to bring in $25 million on it’s opening weekend, A Dog’s Purpose made only around $18 million, largely due to the footage released only weeks before the debut. The talk about this controversial clip has undoubtedly ruined the excitement and anticipation that the film carried.

Although it is advertised as a drama, A Dog’s Purpose has seemed to attract young viewers and families for the sweet and sentimental aspect of it. The touching story is hard to resist and is quite the tearjerker. Sophomore Brooke Davis thought “it was the most heart wrenching movie” and she found herself “crying for an hour straight”. Although there are definitely heavy and emotional moments throughout, she “really enjoyed the movie and the cute moments.”

However,  A Dog’s Purpose received a weak rating of 33% on Rotten Tomatoes, and many people think it is well deserved. Isabel Schwartz, a junior at San Clemente High School, said that “It was really cheesy and extremely sad, I think because of the bad acting” and even though she didn’t particularly enjoy the movie, she really loved the book and was disappointed to see that the movie didn’t live up to it. With an emotionally manipulative script and generic storyline, A Dog’s Purpose doesn’t necessarily have a purpose beyond making the audience cry.

Although there are many mixed emotions about A Dog’s Purpose, most people can agree that it holds a unique plot, being one of the few movies to show a dog’s perspective, instead of a human’s portrayal of the animal. It shows the companionship and love a dog can bring into a person’s life, and it may even spark new appreciation for them.