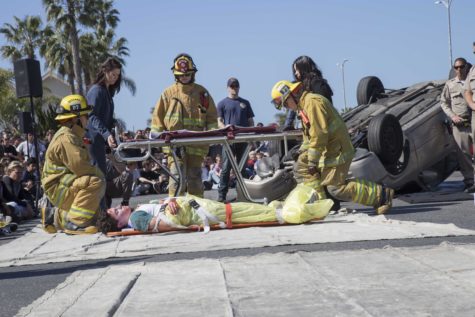 Spanning over two school days on Tuesday, March 28th and Wednesday, March 29th, a DUI crash was simulated before the eyes of San Clemente High School juniors and seniors in the school’s parking lot in order to raise awareness on the effects of drunk driving. Using volunteer students, the demonstration immediately gathered the audience’s attention as they watched their classmates take part in a frighteningly-realistic collision.

The event, better known as “Every 15 Minutes”– a statistic referring to how often someone is killed by drunk driving– was brought to the school by the Wellness & Prevention Center. The Orange County Fire Authority along with the Sheriff’s Department participated in the simulation to further illuminate the potential reality of the situation.

On the first day, onlookers witnessed two cars displayed in the parking lot that were involved in an actual crash. One of the cars was flipped and the other’s windshield was broken in half. The students actors were placed in and around the cars as if they were involved in the crash. Junior Sutton Loughran was shown as lying dead on the asphalt near the overturned car. Blake Birmingham, a senior, had half of his body on the hood from being launched through the windshield and was pronounced “dead” at the scene. Bryce Crane, a junior and the acting driver of the flipped car, was not under the influence, but died on the way to the hospital because he was hit by a drunk driver. The other passengers in the car driven by the drunk driver suffered minor injuries, including the driver, besides senior Lucas Harper who was stuck in the car, suffered head and spinal injuries, and a major leg injury. Other student actors acted as witnesses and called 911. The scene was bloody and panicked, invoking tears from those involved and those watching from the sidelines. 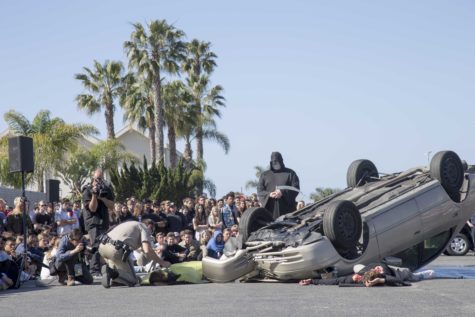 Prior to the mock DUI crash, a handful of students were selected at random and escorted out of class where they would then be pronounced as “dead”. Students were then taken off campus and driven to a hotel where they would spend the night and remain unbound from family, friends, and other aspects of their normal everyday lives.

Ashley Echelberger, a junior, recalls, “Being a part of the retreat was really moving and it was an emotional experience. It reinforced the idea of not taking anything for granted and appreciating all you’re given. A crash does not only affect those in it but everyone around those in the crash.” At the hotel, students participated in exercises such as imagining themselves getting in a car with someone under the influence and what it would be like to have the most important aspects of their lives taken away in a single instant. “We wrote letters to our parents and our parents wrote letters to us and that made me really emotional because it felt like I actually lost them. Overall it was a crazy, emotional, and amazing experience, and I am so thankful I was a part of it.”

Grace Krantz, also a junior, took away a similar lesson, she says, “I learned that life is fragile, and we only have so much time on the earth to accomplish our goals and it’s important to cherish every moment. I will never drink and drive or allow my friends to get in a car with someone who is.” She had a unique perspective as being part of the living dead witnessing the crash and her personal involvement led to her realizations that “I need to love people and look out for their well being” and “it is selfish to try and escape getting in trouble with my parents at the cost of my own or other people’s lives.” The demonstration deeply affected her and Krantz can confidently and truthfully state that drinking and driving, or allowing others to drink and drive, “is a mistake I will never make.”

The following day, juniors and seniors attended the funeral of the lives lost in the crash demonstration, along with those pulled out of class, such as Krantz and Echelberger. As images of the participants’ childhoods and high school memories played on repeat, the students in the gym experienced real sorrow and grief towards all who had feigned death. Faculty talked about the students and the letters written between parents and children were read out loud, making the possibility of losing a classmate in this manner seem so real.

This presentation was very heavy and successfully created a deep and hopefully lasting impact on the student body to carry with them in the rest of their lives, so no SCHS student has to be lost at the fault of drunk driving.