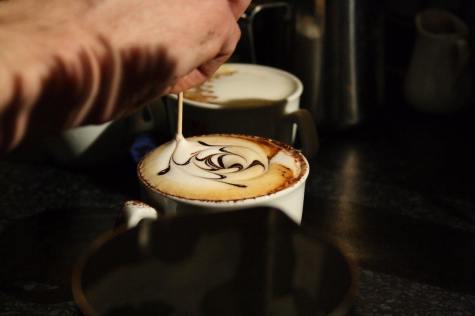 She slammed her car door shut and began shuffling through the two-inch deep crystalized water that had already fallen that early November morning. She rushed to the front doors and as she touched the icy door handle, the girl realized that she’d forgotten her gloves at home for the second day in a row. She pulled on it with a bit more force than intended. The girl let out a deep sigh as a gust of warm air greeted her kindly and insisted upon her entrance. As the glass barrier between the crisp outside world and the cozy inside one shut, she was bombarded with a swirl of scents. With each deep breath she let flow into her lungs she got whiffs of enticing aromas. The air was sweet, in a bitter way, which reminded her of her father and his early morning coffee brewing.

As she gazed at her surroundings her chest fell. It appeared that she wasn’t the only one who thought to leave early to catch a drink of energy before the day got started. There was a long line of grumpy, scrunched up faces. Whether it was because of the waiting or the outside weather conditions, she didn’t know. Nevertheless she found herself with the rest of the early risers, waiting for a cup of Joe. As time passed, she focused on how the line moved an infinitesimal amount each time another customer was served. Because of this, she didn’t notice when a tall man entered, and joined her in line. She was behind a few people still waiting to get to the register when she began to glance at her watch accusingly; willing it not to say that she was dangerously close to being late. Her foot began to tap on the wet and salty linoleum. She let out a great sigh before glaring at her wrist again.

“You know, worrying about it wont change anything.”

She jumped at the deep voice to her left. It was the man in line behind her.

She took a moment to consider his words then replied with, “No, but it makes time go faster.” She was now second in line.

He was nodding his head as if in agreement. “Or you could change something,” he said and took two long strides around her so that he was next in line.

Before she could say anything he was already conversing with the cashier. “My usual Freddie-boy, and don’t skimp on the whip cream this time, eh?” She was too stunned by his actions to do much more than wait for him to finish paying.

As she stepped up to the counter she had a difficult time recalling what she always asked for. She glanced over to where the man was waiting for his order. He was smirking Smirking?!, she thought. Her mouth opened slightly in shock. Then he winked at her. She was seething with fury. She quickly got her wits about her and ordered, paid, and made her way over to the man.

He continued to wear his smirk with pride. His mysterious eyes followed her sauntering hips as she walked briskly towards him. She opened her mouth to speak. What she would have said is a mystery because her train of thought was cut short by an employee who bellowed out the name, “Oliver!” at the top of his lungs. The man, whom she now knew was named Oliver, grabbed the steaming cup and gave the barista a nod, then turned to the girl and said with the most serious face, in a voice that was both deep and sultry, “Don’t settle Sam, change something.” And with that, he exited the coffee shop.

Sam was so stunned by his words that it took her a moment to wonder how he knew her name. She watched him walk away in awe. Her feet began to move forward involuntarily, but stopped abruptly when her name was yelled out in the same booming voice as Oliver’s was. She turned to smile at the employee and received her drink. When she was once again facing the exit, Oliver was nowhere to be seen.

Sam wondered if their paths would ever cross again, and if they did, if they would recognize each other. But she had to admit that his strange words would be difficult to forget.