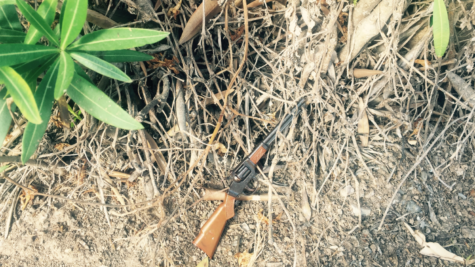 From all my years spent in this queer land of craggy mountains and festooned rainforest, I, Alfred Quisenberry, can safely say that I might very well be the grandest hunter in all South America.

I have known this country since I was three, my family having relocated from Britain on behalf of my father, Edward Quisenberry, wanting to set up a business in trade at Brazil. It prospered for thirty years, our family engendering placid relations with the myriad native peoples of the region, and at age eight, I was educated, among other things, in the use of a firearm. When young schoolboys of Eton were competing for the honour of top footballer, I was stalking tapirs with the Amjuaca cannibals in the Amazon.

Now, aged sixty years , and my father’s enterprise long defunct, I have been deemed by all denominations of the Indians from Columbia to Paraguay the paragon of Nimrods. Hunting excursions were a daily occurrence since boyhood, and over the years, my efforts proved so fruitful that by age fifty, I had tracked and shot virtually every creature in the continent. On record I have at least two specimens of each indigenous organism (from tree frogs, to jaguars) stuffed and mounted at my digs in Venezuela, and was for a time of the belief that there was no animal in South America I haven’t killed.

One day, though,  in the premier stages of summer, as I was pursuing a boar pig on the precincts of my outstation for supper, a member of the Parahuari tribe came rushing towards my residence. By the looks of him, he seemed at once shaken and again beamish. He related to me, in his inured tongue, that whilst on routine reconnoiter he discovered a most unusual creature in the state of Roraima, the likes of which, he thought, I had never hunted before. The way in which he described the beast was indeed quite anomalous, for I gathered from it that the thing he saw was an inordinately large bird, with an anatomy very similar to that of the prehistoric dimorphodon. And its dissimilarities struck me as the most vexatious. It was not covered in scales like its distant relative, and its wings were not membranous, rather feathers in the shape and size of small daggers draped its body in the grossest ubiquity. But, perhaps the queerest part of all was the call of this inchoate creature, for its vociferation was not one of raucous euphony exhibited by a majority of  birds in the region, but instead, it seemed a supercilious susurrus, originating from two clicks from the tongue of varying frequency.

From my years of experience, and my corpus of ornithological papers, a bird of that description had never been within range of my rifle, or in range of thought for that matter.

My infatuation with the animal had germinated thus, and within the span of the same week, I ventured down to Paraguay, where I was granted the pleasure of observing multitudinous illustrations of the bird, and by the look of them, they seemed to fit my entertainer’s description. This reaffirmation of the facts was all that was needed for me to arrange an expedition Roraima with a small group of Indians from various  tribes, whom said to have seen the creature as well.

The venture had taken place in the autumn, and began from Paraguay, where I and my scanty party had departed. We embarked on foot through Bolivia, where we  procured a stock of four canoes; we would head up the Madelra the following day. From there, we traveled up river for four days, and when the cut off from the Madelra to the Amazon was made, two of our canoes were capsized, and four Indians out of eight were lost.  With the passing of a fortnight, we reached the bank where we would proceed thence forward through the entangled jungle on to Roraima. The trek itself was not so easy, for the terrain was excessively craggy, causing us to jaunt uphill most of the way. An Indian broke his ankle and forced us to set up camp by a small creek; he was shot for leading us astray. The very next day, we saw between us and Roraima’s plateau there lie a vast stretch of magnanimous savannah, a congregation of swarthy trees marking the plateau’s base about a mile or so away. How relieved we all were; to us, this innumerable grassland seemed an imitation holy land amid perdition. we crossed it in under an hour, reaching the plateau’s base all but unscathed. Now we had even more jungle to content with.

Throughout the course of our excursion, we saw very little wild animals, primarily because most of our traveling took place throughout the day, and where we passed through was not so thick as to cause our group upset. That was not the case here. The festoons were so numerous that for the first time the aid of machetes was in order, and even when we stepped out onto a patch of tasconias and ipomaea and Jacarita palms, we were met with imminent death. Two Indians were killed, one bitten by the infamous jacara snake, and another bereft of his jugular by a jaguar. We never had to mark any graves on our little adventure, given the organic way in which  members of our party had died, but since these deaths were carried out by irrational animals, my last Indian and I erected a pair under a cluster of palms near a clearing abreast the precipitous base of Roramia’s plateau.

It was in this clearing where our efforts would be rewarded.

I told my Indian to keep a look out for any predators that might happen upon us and shoot any that come within range. He complied and hung near the entrance where the thickets abound. I thence searched the perimeter of the clearing for the odd bird.  However, after a half hour of close scrutiny, I heard something peculiar in the collected scrub near the left most side of the clearing. It was the queer chirp, that obscure susurrus of which my quarry was the especial owner.

Joyous, I held in an impromptu guffaw, and edged gradually nearer to the brush. Over the years, I had amassed some confidence already within me, but with this being an entirely new form of prey, I still didn’t know what to expect, which is why it came as surprise when the chirp was repeated five times in succession, growing in intensity as I stepped ever closer.

When a hunter is faced with a recalcitrant adversary, they would have to grapple with it for a while before a chance to administer the killing blow was granted.  My case was not so, for when I was in the thick of the brush, the unseen bird was still as importunate as it had been when I was without the brush. This was a sign of good fortune, for if the creature was this indifferent towards my advances, then perhaps it wouldn’t mind if its humdrum existence was brought to an end. The monkeys overhead ceased their chatter, and I raised my rifle to my shoulder, the invisible bird chirping threefold placidly.

I fired a round, and once the routine skirmishing of lesser organisms had passed, I let out a shout of triumph, threw down my rifle, and rushed right for wherever the bird might be. But, when I got there, I was met both with disappointment and dread.

Amid the undergrowth, there lay, not a bird, but a man, bearded and clad in gym clothes, his countenance flushed and sallow. Turning him over, I noticed that what little hair he had was bunched up in a deplorable knot—for what reason I could not say—and, at the centre of his spine, was where I haphazardly marked him.

I was flustered, not only by the fact of killing a man chiefly by accident, but by how, through all of this unrest, the bird still managed to allude me. Trembling, I nearly shouted for help, but was interrupted by a preternatural circumstance.  From behind, there came again the chirp, banal and contemptuous.

In desperation, I sifted through the creepers to uncover the source of the persistent clamour. And what I found was indeed very strange.  This wasn’t a bird either, but a queer rectangular apparatus that flashed on its screen the image of a spectre against a yellow, ant infested back drop.  Evidently the chirps came from this.  I was tempted to pick it up to examine it, and nearly did, until a raucous, familiar voice came from the back of me.

“Good show my lad,” it said.  And another followed up with “jolly good, indeed.”

I turned round, and saw a relieving, horrifying sight. Two Britishers in their jungle fatigues, one holding my Indian in restraints, stood by the entrance.  Their pink, sun-burnt, mustachioed  visages bore expressions of eerie gaiety.  They closed in on me intently.

“W-whatever do you mean?” I inquired tremulously. They seemed perfectly daft to me.

“Whatever do we mean?” they said in unison, breaking into sonorous laughter soon after. My Indian nearly went deaf. This soon stopped, and one said “we’ve been after him for months.”

“Yes, of course” replied the other. “You see, he’s what you call a counter-revolutionary, indicated by his shabby garb and mobile phone over there on the ground.”  He pointed to it, and it was still chirping.  “Anyhow,” he continued, “the man you shot was  Londoner Thaddeus Wilkinson, who committed a crime against the world of being mediated, and who’s now wanted for execution.  He thought that in South America, he would never be found.”

“And yet, there he is dead at your feet,” said the first. I had no idea what to think, and held my tongue. They started up a chant of “Hoorah, Hoorah!” and confiscated the mobile phone.

They took me to a port near Brazil and we sailed to Britain, where much indeed was done. There, my Indian was shot and I was deemed an O.B.E. by the world dictator at Buckingham Palace; a respectable enough veneration.

However, to this day, even as I occupy my position as head of the A.A.A. (Aboriginal Annihilation Administration), I still am not so sure as to why.