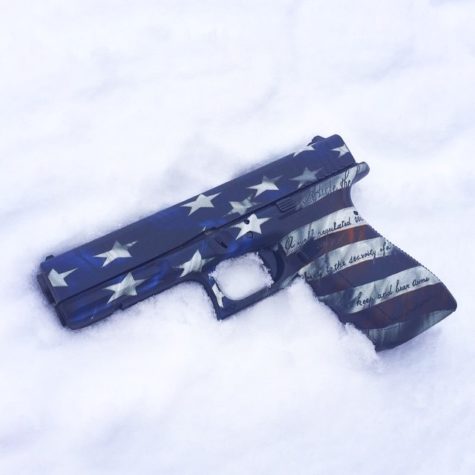 On October 1st of this year, a man lurking above the Harvest Music Festival in Mandalay Bay open fired on unsuspecting concert-goers. The Las Vegas shooting became the most devastating gun massacre in U.S. history, leaving 58 dead and over 500 injured.

In the days that have followed, this catastrophic event has evoked fervent dialog on gun control. Many Americans from both sides of the political spectrum have pounced on the dire need for proactive measures, while the opposition clings tightly to their Second Amendment. San Clemente High School senior CJ Reese commented, “The Second Amendment is the first defense for the First Amendment, both foreign and domestic.”

Gun ownership rights have long been a subject of debate in our country, but the conversation of gun control often becomes misconstrued and unproductive. Many Americans get so caught up in scolding their “opponents” that the entire dialog reflects that of naive children fighting over a toy. There is so much “You’re wrong” to “No, you are,” that the discussion becomes stagnant rather than productive.

The first step to resolution begins with understanding the current state of gun control. The U.S. has a set of federal laws pertaining to gun safety and regulation, and although many Americans believe acquiring a gun is as easy as going to the grocery store, this simply is not true. Firearms can generally be classified into three groups: handguns, rifles, and shotguns. Due to the Firearm Owners Protection Act of 1986, automatic firearms are banned for possession and transfer. A grandfather laws makes the only exception, excluding machine guns manufactured prior to May 19th, 1986. In addition, there are standards gun owners must meet; one of the most important is that convicted criminals may not own any form of a firearm. The restrictions and laws addressing gun owners is a winding and murky path. Although there are a set of federal laws that establish protections for purchasing and distributing, the real complications occur with the incongruency of contradicting state laws. For example, New York and Illinois hold some of the most stringent gun laws in our country. However, surrounding states do not hold the same laws and federal jurisdiction offers gun owners immunity between state lines. This poses a pressing conflict from state to state as what would be an effective gun law is void if the gun owner simply purchased their weapon in a different state.

Although automatics are prohibited, this does not eliminate the danger of automatic guns. There are various devices that can be legally purchased to transform legal guns into tools of mass destruction. In the case of the Las Vegas shooting, the shooter utilized a device called “bump stock.” These devices allow users to replicate the speed of an automatic weapon. The bump stock gave the killer a gun that spit bullets 800 rounds per minute. The already complex ins and outs of gun control have become increasingly more confusing and complex. Prior to this tragedy bump stocks had never been regulated. In recent interviews, Chris Cox, the NRA’s chief lobbyist, stated, “We don’t believe that bans have ever worked on anything.” He continued, “if something transfers a semiautomatic to function like a fully automatic, then it ought to be regulated differently.” Large gun control advocate groups have begun advances in suing the most prominent manufacturers of bumps in hope of kick starting reform on these deadly devices.

Gun laws are diligent in conducting background checks and various other safety measures, although many Americans have come to question the overwhelming recurring headlines on gun violence. Despite the current laws in place, our country experiences these tragedies far too often. It is estimated that each year 11,583 people in the U.S. are murdered by gun violence. According to the National Institution of Justice, anywhere from 270 million to 310 million guns reside in the United States. That gigantic number could supply almost every citizen with a gun, yet only about 3% of Americans actually own the millions of guns. In 2013, the Obama administration introduced a compromising legislation that would have banned semiautomatic assault weapons and expanded background checks. Despite extensive public support, it was not passed and left many citizens outraged at the lack of action following the Sandy Hook shooting.

The U.S. racks up the records for gun owners and gun violence on a global scale. In Australia, mass shootings that occurred between 1987 and 1996 drastically shifted public opinion on gun laws, prompting Parliament to pass stricter regulations on firearms. Since then, Australia hasn’t had a single gun massacre. Data released by OECD in 2010 demonstrated that Americans are 51 times more likely to be killed by a gun than United Kingdom citizens. Senior Jackson Hinkle stated, “When one assesses the number of mass shootings in developed nations such as Australia and Canada, it’s clear that America’s gun issues could be solved with simple policy adaptations.”

In the “Geography of Gun Deaths,” economist Richard Florida concluded that higher populations, increased stress, more immigrants, and more mental illness were not a directly correlating attribution to gun deaths. His most conclusive finding: States with stricter gun control laws have proven to have fewer gun-related deaths.

The safety of American citizens in terms of domestic violence has been severely ignored in addressing issues with gun law reform. Statistics released by the law center to prevent gun violence stated that women are five times more likely to be killed by their abuser if the abuser is a gun owner. In addition to mass shootings, more than 2,000 people are killed in domestic violence, 70% of whom are women. More than 50% of these homicides are committed with legal guns.

Many activists are introducing the possibility of fewer guns, and more difficult means of acquiring them. Often these proposals are met with utter repentance from those whom claim the 2nd Amendment as the Holy Trinity of American existence. The Second Amendment establishes the romance between Americans and their guns, based on the sentiment of “I have the right to bear arms.” Though this is only partially true, the second amendment reads:

“A well regulated Militia, being necessary to the security of a free State, the right of the people to keep and bear Arms, shall not be infringed.”

Anyone who truly feels compelled by the Second Amendment would not only acknowledge their “right” but also the very first sentence of the amendment, “well regulated.” At the core of this amendment, there is mention of reform, regulation, and control. This conversation does not in any way threaten the constitutionality of gun control; in reality, anyone who claims the 2nd Amendment so highly should also be in support of reform. Reform does not mean eradication of guns. Gun control provides Americans with their right to own firearms in addition to their right to be protected from firearms, and theses two elements do not necessarily contradict each other. Regulation and right go hand in hand.