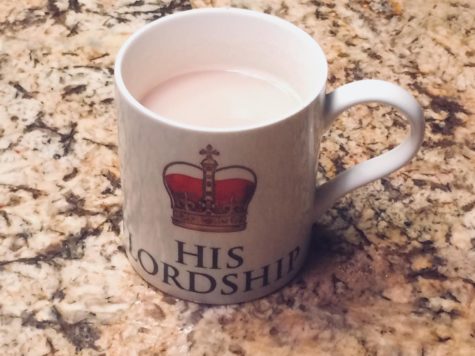 There had been a rather stately woman of a respectable age, who lived with her especially particular husband in Devonshire, and they had lived together in perfect sanguinity;  though her husband had the displeasure of possessing a particularly short temper. This temper had been practiced exceedingly by the man when in the wake of his wife, usually being expressed when he was cross at not getting his way. When the stately little woman happened to fulfill his persistent demands, those occasions being very few in number, he would greet her with well-deserved countenance; and when she failed to do so, his demeanor would be entirely irascible, the countenance having been exchanged for a churlish objurgation. The latter being particularly evident during breakfast. When the woman would pour a cup of coffee for her husband, she would make sure to fill it to the brim, as that was how he liked it; and she would be ever so conscious of the coffee being at that level. But when she brought it out to her husband, as the coffee was exceedingly hot and the cup very cold, he would receive a half cup rather than a full one. At the sight of this, he would promptly objurgate ‘I thought you filled this cup!’, and she would say “I did”, imploringly. But that would not be the end of it, as the man would make it clear that he better get a full cup next time, or else; and she, as she would not think of divorcing him (such a thing under him was inconceivable,) could do nothing more than endeavor to appease him, making sure to refill the coffee upon its dispensation.

One morning, when the stately woman had not gotten up from bed yet, her husband, having been up since five o’clock, who couldn’t wait any longer for his coffee, and who now thought that the only way to get things done properly was to do them himself, had gone over to the kitchen to pour himself his own cup of coffee, making sure to fill it up to the brim. In his mind, he knew that if his wife could not get this sort of thing right, he could. However, about a minute after pouring his coffee,  he was all but taken aback in profound disbelief and surprise upon seeing that the coffee had greatly evaporated, it being as exceedingly hot as it was and the cup itself very cold, leaving only half a cup behind. When the stately woman had finally gotten up and reached the kitchen, she was met by her husband, who, now entirely repented for the invidious matter of many a morning, said, with an air of congeniality: “I know what you mean”.