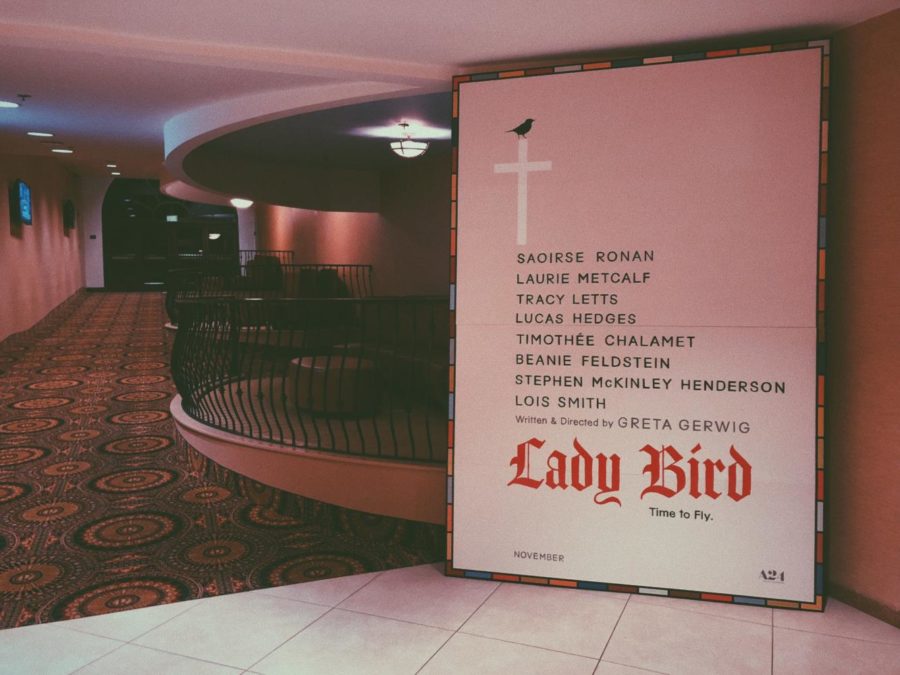 Ladybird (2017) tells the coming of age story of Christine “Ladybird” McPherson (Saorise Ronan) during her senior year of high school. Taking place in Sacramento, CA in 2002, Ladybird struggles with several topics adolescents face during the high school years, ranging from identity formation and strained parental relationships to college applications and senioritis. While Ladybird is a highly unique individual, many viewers, specifically teen girls, find that they can relate to Ladybird in several of her struggles.

San Clemente High School senior Sol Gonzales found that the relationship between herself and her mom was extremely similar to that of Ladybird and her mother: “My mom and I have strong personalities and are arguing almost constantly, just like Ladybird and her mom. Sometimes it’s really frustrating. But Ladybird reminds you to kind of step back and look at the motivation behind all our arguing- it’s a reminder that my mom argues with me because she loves me and is just trying to help, even if it doesn’t seem like it or it isn’t working. Sometimes I think we all kind of forget that at times.” This idea was Ladybird’s primary struggle throughout her senior year, and the attempt for the conflict resolution between the two was the closing scene of the movie. While this was the main moral lesson of the movie, there are several other lessons that can be learned from Ladybird and its charming characters.

1. If something is your dream, chase it with everything you’ve got.

From the first scene in the movie, Ladybird informs the audience that she wants to leave Sacramento (and California as a whole) and go to a liberal arts college on the East Coast. Her mother tells her she won’t get in to any of those colleges and encourages her to go to a city college that is far cheaper. Ladybird’s academic advisor also tells her that she won’t get into any private liberal arts colleges due to her low math grades. Despite heavy opposition, Ladybird persists, doing everything she can to ensure her acceptance. She follows her dreams and is attending a college on the East Coast by the end of the movie. Ladybird has a determination that is extremely admirable, and one that we could probably all use in our lives. Maybe don’t throw away your teacher’s gradebook or cheat on your tests, but you get the general idea.

2. Be yourself and don’t care what other people think.

At the beginning of the movie, Ladybird is unhappy with how pretty she is compared to others. She suggests using a tanning bed with her best friend in order to be as pretty as the most popular girl at school. She compromises her true opinions in order to be friends with the popular group. But soon enough, Ladybird realizes that by concealing who she really is, she’s unhappy, and she even lost her best friend along the way. This iconic realization occurs when a song she loves comes on in the car. Her popular “friends” all express disgust towards the song, and she proudly admits that she likes it. More than just expressing her opinion, this signifies the  moment where Ladybird abandons the popular group to pursue what she wants (which is to go to prom instead of ditching with them) and also makes amends with the best friend she lost. Like Ladybird, it’s important to stay true to yourself and to do what you love. It may seem cliche, but it’s likely that being yourself and ignoring judgment from others will bring you more happiness that comprosing your individuality.

3. Surround yourself with people who you genuinely like and who bring you up.

About midway through the movie, Ladybird becomes friends with the most popular girl in school and starts dating a popular guy. Ladybird doesn’t really have anything in common with either of this individuals; she’s just infatuated with them because they’re pretty and popular. She doesn’t necessarily like either of their personalities. On the other hand, her best friend Julie is someone who she is constantly laughing with and is happy around. Julie is someone who brings her up and who she genuinely enjoys being around. Friendships like Ladybird and Julie’s have far greater value and offer much more value that her superficial relationships with the popular group. Senior Mikayla Hartigan comments on this topic: “I think a lot of people surround themselves with people they are just indifferent about. Sometimes it’s good to look at the people in your life and consider who’s adding something positive to your life. Anyone who isn’t probably isn’t someone you need to be friends with.” Life (and high school in particular) are pretty short, so why waste time around people you don’t like? Choose to spend time with people who you care for and are important to you.

4. Crap goes down in high school. But it’s going to be OK.

Ladybird’s senior year experience is far from perfect. She falls in love with a boy who is actually gay, her mom is constantly criticizing her every action, she is struggling in school, and she has difficulty finding genuine friends. Things are going to go haywire in all of our lives, and more dramatically so in high school. The most important thing is to remember that all these seemingly devastating moments will pass and will get better. Do what you can to make issues in your life less prominent, but for upsetting issues that seem endless, try to remember that they aren’t. It’ll all get better soon enough.

5. Adults go through hard times, too.

Several adult figures in Ladybird’s life are struggling with their emotions. Ladybird’s mom can’t figure out how to help her without arguing and yelling with her, and her father is unable to secure a job and is struggling with depression. Ladybird’s theatre instructor is also struggling with depression, despite his apparent happy-go-lucky attitude. Often times, we forget that adults, specifically our parents, are not invincible and do have real problems. And, as adolescents, we may not know how to help them. The best thing to do is to just try to be kind. To everybody. Even if we’re unsure how to help guiding figures in our lives, showing kindness can remind them that we care. This goes for parents, too!

6. Love comes in many unique and surprising forms.

Probably the most significant theme in the film, this idea is most strongly depicted between Ladybird and her mother. They criticize each other’s every action, constantly arguing and constantly bickering. Ladybird’s academic advisor later suggests that paying attention to someone might be the same thing as love, as we don’t pay attention to things we don’t care about. This analogy can be directly applied to Ladybird’s mother. While constantly critical, Ladybird’s mother just wants the best for her, and she is ultimately just trying to help her be the best version of herself.

These may seem like a lot of life lessons, but you really don’t have to take them all in at once. Pick a few that you feel really apply to your life and try to consider them as you continue through high school. There’s a chance that our senior years will be as spontaneous, thrilling, adventure-filled, and crazy-awesome as Ladybird McPherson’s.