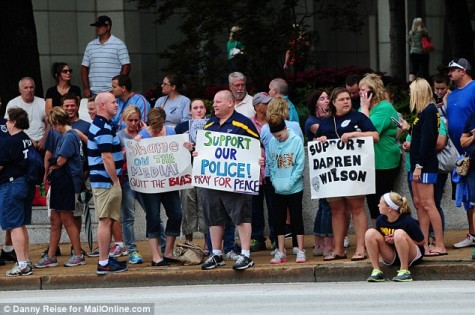 To check out the counter argument to this hotly debated ruling, please click here!

Before half of you readers write me off for siding with the “brutal, white-supremacist cop,” please let me explain myself. This article is not meant to offend anyone, or to incite animosity of any kind; I am merely expressing my own opinion along with as many accurate and objective facts of this case that I can find. Let me be clear: I am not racist, nor am I glad that a human being died, nor do I support police brutality. I’m not even saying that police brutality isn’t a problem in the United States; it is, in some places. I just believe that this particular incident should not be held up as a scapegoat for the issue of police brutality, that Officer Darren Wilson should not be villainized for his involvement in the death of Michael Brown, and that the controversial decision of the Ferguson Grand Jury to decline to indict

‪Officer Wilson was appropriate given the implications of the available evidence.

‪    The available evidence being:

‪Obviously, the most controversy and obscurity lies with the third bullet point, addressing Brown’s death. In an attempt to determine the precise circumstances of in which his death occurred, the United States Department of Justice ordered a third autopsy on the body of Michael Brown, performed on Aug. 18th (9 days after the incident) by the Armed Forces Medical Examiner System (AFMES). Their study concluded, “Gross and microscopic examinations of the tangential gunshot wound to the right hand reveal with strong likelihood the presence of soot (an indication of close range discharge of a firearm). There is no evidence of close range discharge of a firearm elsewhere. The postmortem toxicology screen is positive for cannabinoids (chemical compounds of marijuana). The manner of death is homicide.”

What does this mean? The evidence of “close range discharge of firearm” supports Officer Wilson’s claim that his gun went off during a scuffle with Brown through the open window of his police car during the beginning of the encounter. The presence of cannabinoids confirms Brown’s prior consumption of marijuana. And the conclusion of the manner of death (homicide) means that in order for Officer Wilson’s actions to have been legal (as they were deemed by the Ferguson Grand Jury), the circumstances of the incident had to fall within the parameters of deadly force policy of the Ferguson Police Department:

“An officer may use deadly lethal force when the officer reasonably believes that the action is in defense of human life, including the officers own life, or in defense of any person in imminent danger of serious physical injury. The officer should have exhausted every alternative means of apprehension before using deadly force and lethal force will not be used if there’s a clear risk to the safety of a third person.”

‪Officer Wilson’s claim that Brown was charging him at the time he was shot, and that Brown had previously been reaching for the police officer’s gun, is both supported by the conclusions of the autopsy performed by AFMES and descriptive of sufficient circumstances for the use of deadly force on part of the law enforcement. Presumably, this is why the grand jury declined to convict Wilson.

It’s worth noting that the Ferguson grand jury had access to the most reliable (and likely more extensive) evidence of this case; that the racial composition of the jury (9 white jurors, 3 black jurors) was designed for the sole purpose of reflecting the racial makeup of St. Louis County (~24% black population, ~68% white population); that purpose of the grand jury is not to convict a suspect, but to determine whether there is sufficient evidence against that individual in the first place; and that the primary policy of the United States Justice system is “Innocent until proven guilty” – a policy which, I might add, would have been identically applied to Michael Brown, had he been brought into custody for robbing a convenience store.

As a nation, we rely on police officers every day. We ask them to risk their lives in the service of public safety, and they freely do so. We call on them in times of danger, and they willingly respond. Surely they at least deserve the same benefit of the doubt that we extend toward the criminals they risk their lives to apprehend?

The death of Michael Brown was tragic. The violence, destruction, and controversy that his death sparked was appalling. But the actions of Darren Wilson were justified, as was the decision of the Ferguson Grand Jury.