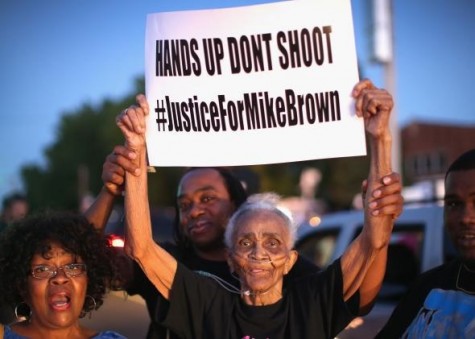 To check out the counter argument to this hotly debated issue, please click here!

On November 23rd, 2014 the Ferguson Grand Jury announced their decision to not indict white police officer Darren Wilson for killing an unarmed black teenager, Michael Brown. Months later the verdict is still a controversial issue and will remain, as President Barrack Obama said, “a subject of great disagreement.”

Many of the details of Wilson and Brown’s fatal encounter will never be confirmed true or false, not only because one of key eyewitnesses is dead but also because it is a matter of “he said, she said”.

What we do know for sure?

Wilson did not know that Brown was a suspect in a robbery that had taken place the same night as the shooting. Wilson stopped Brown and his friend, Dorian Johnson, for walking in the middle of the street.
Despite suspected involvement in an early robbery, Brown and Johnson were unarmed.
All of the shots were fired at Brown’s front side, including the two fatal shots at Brown’s head
The police department did not take any body measurements at the scene
The police department did not interview the key witness, Johnson, until three days after the shooting
There have been three different autopsies conducted on the body of Michael Brown. The official autopsy performed by the St. Louis County Medical Examiner stated that Brown was shot in the hand at close range.

Defenders of Wilson argue this evidence supports Wilson’s claim that Brown struggled for his gun in the police vehicle. However medial experts around the country disagree with this conclusion.

Dr. Michael M. Baden, a highly-acclaimed forensic pathologist, argues that none of Brown’s wounds appeared to have been from shots fired at close range. He points out the absence of any gun shot residue on the body, meaning the gun was at least two to three feet away from Brown. Baden said the gun could have been “30 feet away”.

Police officials and eyewitness give completely different accounts of the shooting. Eyewitnesses say Brown was killed and shot with his hands up, facing the officer, in surrender position. Officer Wilson claims Brown was charging towards him when he fired the fatal shoots. Nonetheless, an excessive six shots were fired into the front of the unarmed teenager from the white police officer.

Wilson said his “life was in danger”, causing him to shoot, but police officers are trained to shoot to wound not to to kill.

The official toxicology found there was a presence of THC, an ingredient of marijuana, in Brown’s blood. However, this does not indicate that Brown was under the influence at the time of the death. THC can remain in a person’s blood days or even weeks after using marijuana.

As Jonathan Caulkins of Carnegie-Mellon University noted, “marijuana use is not associated with elevated levels of violence the way that alcohol or even cocaine are.” Therefore the finding that Brown may have been under the influence reveals very little about how or why the situation escalated between Wilson and Brown.

Ferguson was already a city with racial tension and a great amount of distrust between the police and the racial minorities. 67% of Ferguson’s residents are black, making Ferguson a majorly black town.

However, this is not reflected in the racial makeup of the city’s officials. Ferguson has a white mayor, five out of six city council members are white, six out of seven school board members are white, and only 3 out of the 53 Ferguson police officers are black.

As evidenced by these facts, city office holders do not represent the true demographics of Ferguson’s residents. This is problematic in creating a racial barrier between officials and the citizens.

Supporting the claim that Brown had his hands up with the intention to surrender, people around the country are using the “hands up, don’t shoot” gesture as a protest slogan and symbol. Professional athletes, musicians, performers and even Congressional staffers have used this gesture as a way to explicitly show objection to the Ferguson decision.