In attempts to promote social distancing and reduce the number of COVID-19 cases, on April 8, San Clemente shut down all city beaches. This process actually began on March 25 when the city closed down all public beachfront parking lots, a step taken because people were not adhering to the social distancing guidelines at the beach. When matters got worse, an extra step had to be taken, hence the move to close the waters in a town which revolves around surfing.

At every possible entrance to the beach trail, there is a city worker preventing any people from getting on. Lifeguards constantly patrol the beaches to ensure everybody is staying off them. Even lifeguard boats roam the waters just in case someone was able to somehow get in the water.

This entire controversy of whether in the ocean the virus spreads faster started when an atmospheric chemist at the Scripps Institution of Oceanography by the name of Kim Prather claimed she discovered something alarming in her research. She believes the virus can spread to someone in the water easier, but scientists do not know enough about the virus to come to any conclusions. In a Los Angeles Times Interview, Prather said, “I wouldn’t go in the water if you paid me $1 million right now.”

SCHS junior and surfer Aidan Giacobello says, “I think we should be able to surf, even if the virus can be easier transmitted in the water then surfers will just stay further apart from each other.”

An incident this past Thursday on April 9 involving two surfers, demonstrates what this town of surfers is willing to do when they can not surf anymore. That Thursday was the first day the beaches were closed, but an amazing swell was rolling through, pumping out great waves to go unriden. Two surfers came up with the brilliant idea to launch a dinghy from a secluded area and drive it out to lowers where there was nobody surfing. They docked it near the beach, and then paddled out into some decent sized waves. However, their plan did not turn out the way they wanted it to. They spent an hour trying to get out to the main peak, their dinghy eventually capsized, and the state lifeguards ended up paddling out and making them get out of the water. All in all, if that does not show dedication to surfing then I don’t know what does. 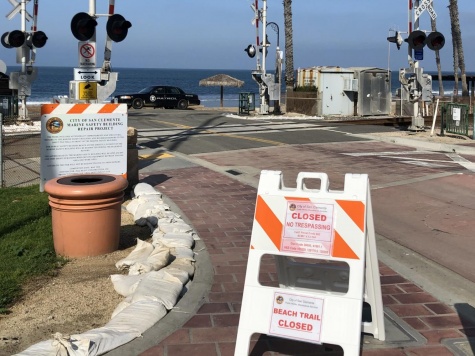 You might think those two surfers are unique in their desire to surf, but they are just two of many other surfers who share that same desire to want to be surfing right now. That is why there is currently a petition going around town right now, called the Petition to Re-Open Local Beaches on change.org. They are looking to get to one thousand signatures, and it certainly looks like they are going to hit that number very soon.

I just want to surf again, because the places that I go have nobody around so I don’t have to worry about crowds,’ says SCHS sophomore Cash McConnell.

If the beaches reopen, there will be plenty of room for surfers to enjoy the waves at reasonable distances from each other. Maybe the city will make rules about whether a surfer can enter the water depending on how crowded that break already is. The city will put safety first, as is everywhere in the world, so it will be interesting to see if the surfers beat this controversy and win their wonderful waters back.