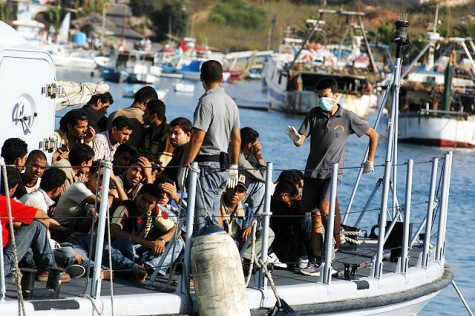 April 19th. A single day in the major migrant crisis ripping through the Mediterranean.

On that day, a boat holding more than eight hundred people became submerged, and only twenty-eight survived. Prior, the boat’s captain had had some sort of trouble and called for help. In a panic, the people locked in the hold below moved to one side, causing the boat to capsize. Survivors, including young children and teenagers, remember hearing those locked below scream for help as the boat sank.

As conditions in origin countries continue to become worse, more and more people are attempting to escape to the promising and ideal Europe. In doing this, however, many are subjected to conditions that are comparable to a slave trade. Smugglers promise safe passageway to Europe for an expensive fee, and due to the desperateness of the migrants they agree.

This trip first includes a five to seven day journey across the Sahara, though many migrants do not even know what the desert is. Upon arrival, the migrants are held in cells in Gao, the mecca for human traffickers. After days or weeks in these cells, suffering horrible conditions, the smugglers force the migrants onto boats. Many of the vessels are too small and too unstable to hold the hundreds of people put on them. If the migrant fights to escape, he is beaten and thrown on. To make the trip seem safer, the smugglers call the Mediterranean the “big river,” for many of the migrants had never seen the sea before.

Human traffickers, those who promise safe passages across the Mediterranean, are the root of this disaster. Many people feel that the focus should be placed on stopping the smugglers rather than the migrants. To do this, the European Union (also known as the EU, which is the politico-economic union of 28 countries that are located mostly in Europe) must help rebuild the war-torn countries and prevent future conflict within them. This, in effect, would lead to a decrease in people wanting to migrate from their origin countries, in that many leave because of the lack of rights and intense violence in their countries.

However, many European countries are not keen to accepting migrants. Following an economic crisis that raged rampant across the continent, countries only see the burden that migrants will bring on their economies. They see future refugees.

Currently, Italy is the focus point of smugglers, but it was not always this way. Spain was once the goal, but after its government made deals with the countries of origin, traffickers were forced to move elsewhere. Greece and Bulgaria are also becoming destinations. However, for the majority of migrants, these countries do not mark the end of their journey. Most travel further into more “ideal” countries such as Germany or the UK.

A solution is being demanded. It is felt that the countries should no longer only acknowledge the crises, but rather actually stop it from happening in the future. A long-term plan to help unstable countries in Africa and Middle East is a hope for EU leaders. Basic human rights are being violated, and citizens of those countries are desperate to lead better lives elsewhere. Starvation, conflict, and lack of freedom push these people to break away from their country’s regimes.

Germany, feeling pressure from the millions of migrants weighing on their country, plans to move and distribute migrants across the EU countries to relieve stress on their economy. Only in the beginning parts of development, this idea is on the table.

A possible mandate from the UN wherein militia would destroy traffickers’ ships before use is being pushed by Italy. This is seen as needed, but not necessarily acceptable. Whether or not this will come to fruition is still in question.

It has been issued that the EU will triple the budget for search and rescue operations.

This year, eight of ten deaths occurring in Europe were due to a migrant boat crisis.