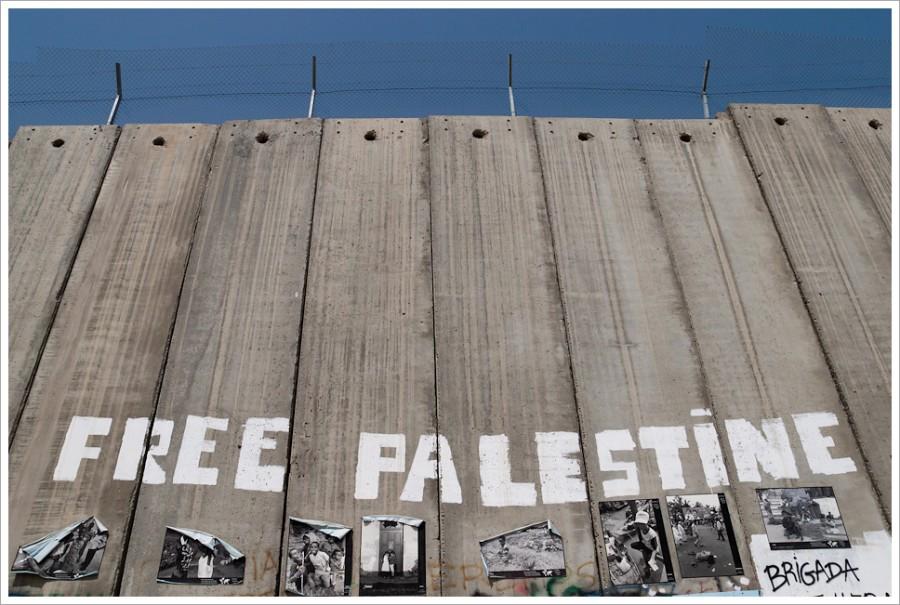 Light and excited cries in a beautiful, foreign language punctuated each sharp intake of breath, each thud of the foot on the accommodating grass. The foot made assured contact with the ball and sent it whistling through air. The net rippled. Giddy cheer erupted. Two boys danced gleefully, and their white-toothed smiles and bright eyes painted a scene of youthful bliss. Back home in their native land of Israel, however, the picture was one of religious and racial slurs, bullets, kidnappings, confusion, and hatred.

Their land, one whose heart both throbs with the souls of three religions rich with hope and pounds with the shots of rifles belonging to a war distinctly and intricately human, is awash in the darker side of its character, a reflection of the two extremes of man. The rolling deserts, its openness nature’s liberators of the human mind and its ambition, are soaked with the blood of not only the Israelis, but the Palestinians, both nations victim to a cruel distortion of love and faith. Over five years later, these two boys have been greeted by this gruesome reality, one that has stripped away whatever innocence was still left. They see the horrors of anguished man up close in the form of massacres, air raids, propaganda, and bombings.

But those on the outside, those beyond the rolling graveyards of the Middle East, fail to see the truth of either the Israeli or the Palestinian. Blinded by prejudices formed by political preference and sheer lack of knowledge, they error by painting a conflict black and white when, in reality, it is a red so rich, one can hardly see their own reflection in it.

Israel, a country beset by outside threats since its formation, has integrated military and culture so that being a member of the armed forces is very commonplace and, in fact, expected. 80% of Israelis are recruited into the army once they reach 18 years of age, regardless of gender. It is seen as a means of solidifying and ascertaining patriotism and is comparable in Israeli culture to university elsewhere.

This reveals the prominence of a defensive mindset within the overwhelmingly Jewish nation and thus insinuates a paranoia that stems from years of wars with its Arab neighbors and the Palestinians living in settlements on its borders. Many in Israel must balance reason and a relatively peaceful life with their history and the constant threat of attack from terrorist groups feeding off the vulnerability of Palestinians and hostile countries known for radicalism and anti-Western rhetoric, such as Iran.

The constant anxiety that an attack on the nation’s sovereignty is impending has directed the nation’s political and social ideology, at least in political practice, in a more belligerent direction. The people’s re-election of Prime Minister Benjamin Netanyahu, a man who is noticeably unforgiving of the Palestinians and unwilling to yield much ground to Israel’s previous inhabitants, has only reaffirmed the persistent fear in this society. Nonetheless, this support of a more radical leader is contradicted by the people’s strong distaste for their government as their society embraces an increasingly secularized culture.

Todd Shotz, a Jewish educator, remarked on the sharp contrast between political policy and the sentiment of the people, saying that “The press tears them (the government) to shreds. Only in Israel do they conduct post war reports and find their own government at fault.” He also referenced the lack of religious fervor in the nation located on what is revered as the Holy Land.
In fact, a recent Gallup poll has found Israel, a country whose reputation is built upon its Judaism, one of the world’s least religious countries. This is perhaps due to societal evolution, the disillusioning violence of the times, or simply the country was founded and developed on the grounds of escaping European persecution and alienation, with religion as more of a outwardly pretext. This reformed internal identity nonetheless has yet to be fully understood by the outside world, which still persists in labeling Israel a state built upon and motivated by religion.

Despite a surprisingly secular culture, discrimination contradicting the values of freedom and democracy expressed by Israel is rampant, albeit often overlooked or unnoticed. Laws directly impede on the natural rights of religious and ethnic minorities and enable discrimination in religion, education, and work.

Moreover, Arab settlements within Israel are unrecognized by the state and funding towards minorities is severely less than what is provided for Jews. The ancient city of Jerusalem also remains a source of great contention, as it is a city dear to Christianity, Judaism, and Islam. Fights over shrines and ancient sites within the city a still persist and can portray Israel as an oppressor of its minorities and of the Palestinian refugees.

This oppression is reinforced by global perception. The Palestinians are colored in world news as obscure terrorists and either of violence or of alienation. Men and women with blank eyes and gaunt faces blend together into an indistinguishable mass of human ugliness and struggle. Their poverty and oppression fit into a broad theme of general suffering that has made the struggle of many Arabs either impenetrable or somewhat “normal” and “accepted” to the social consciousness of those living in the first world bubble. Moreover, their lack of status of as their own nation detracts from people’s ability to connect with them and distinguish their own cultural soul from the religiously charged stereotypes that surround the cultures of fellow Arab and predominantly Muslim states.

This outside world is in fact blamed by history for perpetrating the struggle for the Holy Land in the first place. The lack of the Western world’s understanding of the Middle Eastern reality has resulted in a cumbersome interference that has manipulated outside perception of the crisis and globalized something that only worsens under the weight of other country’s interests. America’s ardent pro-Israeli stance, which is motivated by regional interests (weakening Iran, etc.) more than anything else, has influenced and shaped full generations’ sentiments regarding the crisis.
American society as a whole must better reflect the motivations of the students interviewed for their sentiments on the crisis, who were reluctant to respond not due to lack of opinion but because of what they felt was a lack of knowledge of the vast scope of the conflict. Fairness must take the place of blind political rhetoric encouraged by a society unable to ever fully comprehend the Middle East. Palestinians must receive the same attention and sympathies as the Israelis if the conflict is to be resolved on the whole, and not with the subjugation of one side of the fight.
Although Israelis do suffer persecution from Islamic countries who disapprove of an inherently Jewish nation being in their midst, their failure to construct and act on a formidable resolution to give Palestinians their own separate state dishonors the refugees’ right to sovereignty, a right they themselves fight so strenuously to preserve.

Regardless of whatever the country behind the stage feels about the show their leaders are putting on, the country is engaging in a level of hypocrisy that deepens the rift between the two sides. While it is fully impossible to understand the intricacies of either side’s social and religious consciousness without being of either Israeli or Palestinian blood, eliminating discrimination reminiscent in some degrees to those imposed on the African Americans in early 20th century America is key in finding resolution to this conflict.

The playing field must be leveled, and more time must be spent by outside forces bent on making an impact helping strengthen the economic fabric of the informal Palestinian state if it wishes to alleviate a distinct brand of pessimism within their society and help shake Hamas from their settlements and, effectively, their government and society.

The boys are back in their homeland, ready to inherit the fight of their parents and grandparents. They have pride in their country and wish to preserve it with their lives. Meanwhile, in the Gaza Strip, boys look out of makeshift tents at the scene of haphazard poverty and feel the weight of the struggle of their own parents and grandparents. They yearn for their struggle to be validated. They crave for their people to achieve respect in a game in which they are treating more as a piece on a political game board than an actual society. They yearn for a home for themselves.

The Israeli and Palestinian youth of this day and age have the opportunity to move beyond the prejudices and fears that have inhibited previous generations. They can look beyond religion, ancestral origin, the scars of a tumultuous history, and see in each other human eyes and a human desire for peace and happiness. Identifying with each other first and foremost as humans who have endured much strife in their quest for happiness is what will free them of the political and social conundrum that has entangled the two misunderstood peoples for nearly seventy years.

This may sound foolish in its idealistic overtones, but a healthy dose of idealism is often needed to breathe life and hope into something that has become stagnant with the sometimes paralyzing authority and oppression of realism. A blend of this idealism with reality should energize the fight to end this self-destructive conflict and bring both what they desire: a home to cherish, separate in nationality, but alike in their end goal and contentment.