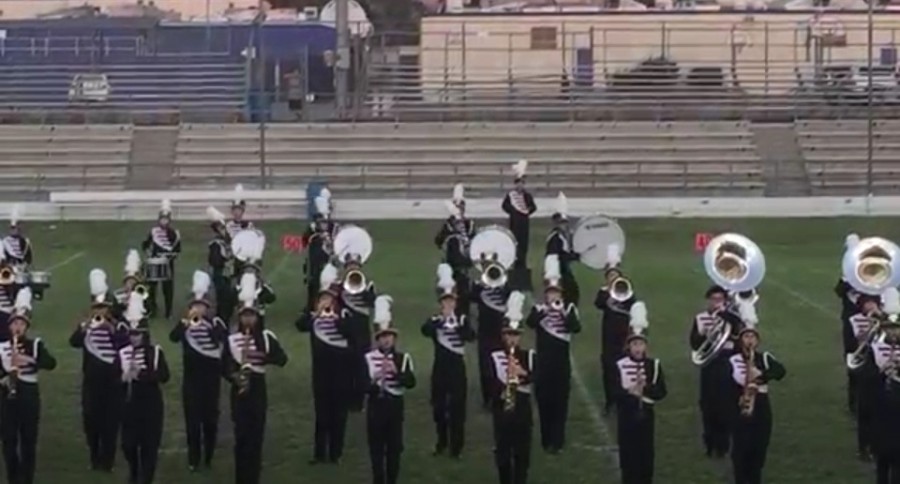 We hear them at every football game, but does anyone really know the San Clemente High School Marching Alliance?   What the marching band does behind the scenes seems to be a mystery.

Providing more insight on the marching band is two of the most important members of the band – the drum majors. Ranking as the highest of the student leaders for the band, they are the ones you see conducting the band through all of their movements of the show. The drum majors bear the responsibility of keeping everyone on task, on rhythm, and ensuring everything runs smoothly so that the band can perform to the best of their ability.

This year, the band’s drum majors are senior Sarah Mills and junior Daniel Williams, who are both very passionate about music. “To me, the marching band is the biggest representation of school spirit we have,” Mills said.

Williams added, “Every performance, the show is going to improve because of it.”

The marching band is performing an upcoming show previously chosen by Mr. Soto, the band director and head of the instrumental music department, based on the music of performance group Cirque du Soleil, specifically from their performance Ka, Quidam, and La Nouba.

“I chose this show for the band this year because it’s a big step up from last year,” said Soto. “The students can tell that the show is going to be harder this year, but it will also be a lot more fun.”

Mr. Soto has been leading the Triton Marching Alliance since he joined this school’s music program in 2008. “So far, this year has been great,” Soto declared. “The students have been wanting so much more so the progress is shown greatly.”

It’s sometimes said by some of the students that there is “no fun in marching band” but Soto only partially agrees. “It’s fun to be good,” he explained, “and this year, these students are better than good.”

The marching band performed in their first competition on Saturday, October 10th at La Habra against several other bands. At the competition, every band that showed up was divided into different groups based on size, from 1A, being the smallest to 5A, being the largest. Our band fit into the very top of the 3A category, with just under 80 members, the cap for that division. The band scored a 68.3 and placed second in the 3A division.

Still asking what the Triton marching band is? Well, simply put, they are a number of things – an assortment of our local musicians, a form of publicity for SCHS events, and/or the core of our school’s spirit that they continue to represent.