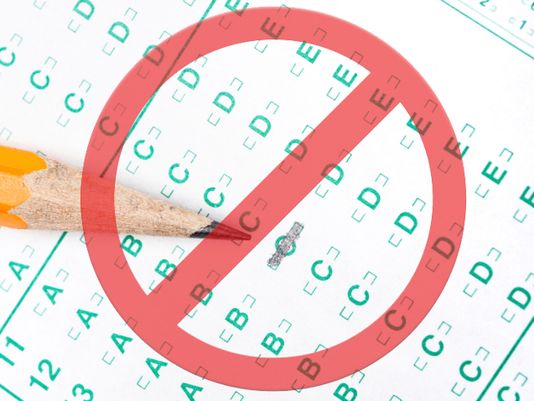 Those who have attended pubic school for the duration of their elementary and secondary academic career have likely spent at least one full week and a little more than two days of your life completing standardized testing (calculated based on data from the Council of the Great City Schools, from 1st to 9th grade). That’s about equivalent to binge-watching the entire short-lived run of Freaks and Geeks, every single episode of Modern Family in existence, all episodes of Sherlock ever made, nine seasons of The Big Bang Theory, and all 208 How I Met Your Mother episodes in succession without stopping.

When carefully weighted, both standardized testing and binge-watching half of Netflix have about the same instructional value. Or, in terms of nutritional value, they are the educational equivalent of the nutrition contained in a bowl of Lucky Charms saturated in duck fat. Gross, right?

When people are kids, they potentially don’t mind downing an entire bowl of duck fat Lucky Charms, but as they age, their tastes generally mature and something with more substance is desired. Younger students often look forward to standardized testing because it roughly translated into missing an entire day of actual learning. However, as students advance through the educational system, it becomes harder and harder to miss a day of instructional time because that missing time will be inevitably crammed in  before AP testing, another source of profound stress and fatigue for high school students. Standardized tests are no substitute for instructional testing.

How are students to learn if they can’t learn from their mistakes? One of the many inherent flaws of the standardized testing system is the lack of  help students show what they did wrong and explain why the answer is the correct one. For tests such as the CST and CAHSEE tests, students are simply given a score and not shown exactly what they did wrong—and more importantly, how to learn from it. There are very valid reasons why test companies can’t release questions or answers, reasons that amount to about $20 to $30 billion dollars, the approximate value of the testing and textbook industry.

Executive at a testing company have crafted an ingenious business plan. They dress their tests as invaluable to schools and make them ubiquitous throughout pre-college education. It’s a tried and true business model that has continuously emphasizes rote memorization rather than actual comprehension and application of concepts. The tests generate money for their inflated industries without furthering the intellect of students.

Standardized testing, though important for data collection, is largely overused on a national scale and stifles rather than gauges a student’s intellect and understanding. The best alternative involves reducing the amount of testing while increasing the utility of the tests in terms of instructional value. After all, Netflix binging and Lucky Charms are okay in moderate quantities, as long as plenty of time is left to study the material that matters for “real” life. Perhaps the best way to accomplish this difficult task is through online tests with immediate feedback where students can understand the reasoning, or justify their own. There’s no reason why standardized tests shouldn’t work to benefit the students in addition to the parties they’re already benefiting, namely the institution who receives the data and the test company. Thinking and learning should be made standardized tests’ top priority, and providing feedback and adapting the nature of tests’ questions are vital first steps towards that final destination.