The weekend of Saturday, April 16th, saw some of the most notable seismic activity in recent years.

The island of Kyushu, Japan, suffered two of the three serious earthquakes . The first occurred on Thursday, April 14, near Ueki City. With a magnitude of 6.2, many people believed that it was the beginning and end of the seismic activity.

However, after a magnitude 7.0 earthquake hit just over nine miles away in the Kumamoto Prefecture, shock and chaos ensued. In combination, the tremblors have caused at least forty deaths and over one thousand injuries. Rescue teams numbering 30,000 in total have been deployed to the rubble; hundreds of survivors are believed to be trapped underneath collapsed buildings.

To further the disaster, heavy rains pounded the Kyushu region until the following Sunday, and aftershocks from the quakes have been nearly constant in the Kumamoto territory; over 165 have transpired si 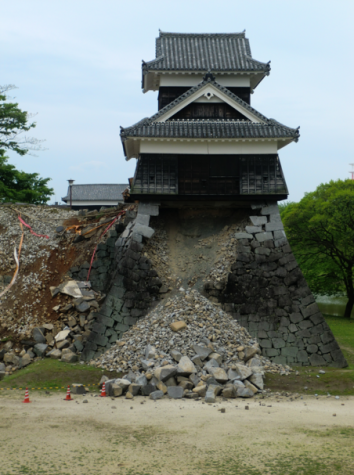 The government of the Kumamoto region has established over one hundred evacuation centers for its shaken citizens. The effects of the disaster are devastating, since many families have lost everything; the packages of food, water, and blankets that are being handed out at the centers are salvation for a multitude of people. Medical help has also been provided: innumerable citizens were treated for notable cuts from glass and broken bones from falling items.

The quakes were not specific in their damage, affecting all walks of Japanese life. In addition to the hundreds of homes and businesses that were destroyed by the tremors, major historical sites also sustained great damage. The Kumamoto Castle, dating back to the 17th century, was badly injured and is now in a state of near collapse.

To add insult to injury, the Japanese mountain of Aso also experienced a small-scale eruption. Though not definitively related to the quakes, the event does not fail to be jarring to both citizens and scientists alike. Baily Donlin, a junior, commented, “Japan is still recovering from the effects of the Fukushima disaster of 2011. To think that the nation now has to rebuild from these earthquakes is heartbreaking.”

Seemingly in concurrence, Ecuador endured a catastrophic 7.8-magnitude earthquake also on Saturday, a little over twelve hours after the Kumamoto temblors. In a statement to Ecuadorian media, Vice President Jorge Gles predicted an injury toll of over 2,500 people.

Every one of the six coastal provinces of Ecuador, Guayas, Manabí, Santo Domingo, Los Rios, Esmeraldas and Galapagos, now exist in a state of emergency, prompting surrounding countries to send in relief forces for aid.

Mobile hospitals were constructed across the affected region by nearly fifteen thousand soldiers and police officers. The death toll is well over two hundred, estimated at around 272, and sees no end in coming days as rescue teams comb through the rubble. The Manabi Province suffered the most loss of life, with about two hundred dead. This is the most devastating quake to strike Ecuador since 1987, when a magnitude 7.2 temblor killed approximately a thousand people.

The earthquake’s epicenter was located about sixteen miles southeast of Muisne, a coastal city in the Esmeraldas province. The Ecuadorian earthquake was at least fifteen times stronger in energy than its Japanese counterpart; in its entirety, Ecuador’s seismic activity was six times larger than Japan’s. 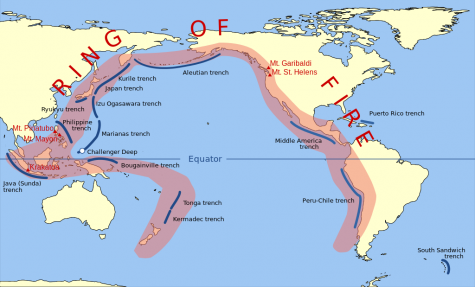 Though surely too coincidental to be discredited, it is currently far too early to discern whether the two earthquakes
were related to each other. Both of the quakes are incidentally located on the Pacific ocean’s “Ring of Fire,” which is a 25,000 mile tract of volcanic mountains and seismic unrest, that accounts for about 90% of Earth’s yearly quakes. Being that the two epicenters were over 9,500 miles apart, a close relation seems slightly unlikely; however, only time and research can tell.

In the words of junior Olivia Whitney, “The two earthquakes are so tragic. It’s scary because we live in California and it feels very close to home, and something like that could happen here.”
Utterly unseen and entirely surprising, these intense seismic events span seas and soon years in their impact. Both Japan and Ecuador have a long path to recovery; the damage sustained by either region is substantial. If you are interested in donating to a relief fund, please visit the UNICEF, Association for Aid and Relief of Japan, or CARE websites. Thank you.