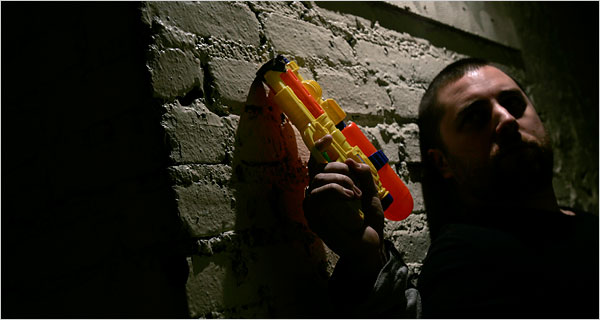 Happen to see any San Clemente High School seniors tip-toeing around town with an air of paranoia and clutching tightly to spray bottles? Starting on April 12, a game arranged by the senior class at the end of every school year, was the commencement Senior Assassin 2016.

All of the seniors pitch in $5.00 to participate in the game and each student picks the name of another class member and that person becomes their “target”.

In order to kill your target, you must use either a spray bottle or squirt gun to shoot your target with water. Once you get your target, their target becomes your new one. The object of the game is to be the last assassin alive, and when that is accomplished, you win all of the money that was pitched in by the students.When the game first starts out, every location on the school campus is a safety zone, so the assassins must find alternatives to hunting down their targets.

Our senior class president, Izzy Moiso, explained how she got out on the first day when, “a student was hiding under my car in the morning before I left for school, and when I walked out my assassin jumped out from under my car and shot me!”

After about a week into the game, the paranoia begins to overcome the students. Assassins begin learning their target’s everyday schedule, even places of work just to get them at the end of their shift. Many students are even known for skipping certain classes just so their assassins cannot get to them.

After a couple of weeks, the parking lot opens up, and that’s when things get crazy. On Monday, Taryn Foote told us how she was, “walking out to my car while I was on the phone with my friend, and my assassin came up behind me and called out my name. I  turned around and realized what was happening. Next thing I knew, he shot me in my ear and I was no longer in the competition.”

Currently the game is still going on and school grounds have yet to be opened. Once the school is opened for battle, no one is guaranteed safety. The campus typically doesn’t open up until the very end of the game because once school grounds are open, people die off very quickly and the students want to ensure a game that lasts until the end of the year. Many assassins happen at other places like parties. Mckenna Ray described how, “over the weekend, I was at a party and decided to bring my spray bottle just in case my target happened to be there. Right when I walked in the door, I spotted him. I had one of my friends go up to him and strike up a conversation, and then I walked up a sprayed him.”

The game typically ends on the day before graduation. In past years, there has been more than one lone assassin in the end and in that case, the money is divided between the remainder of the people. This year, there is about $1,200 at stake, and Ryan Fuchs told us, “I will do anything it takes to bring home the money.” With just about six weeks left at school, it is hard to say who exactly could win, but it’s known that some are taking it more seriously than others!