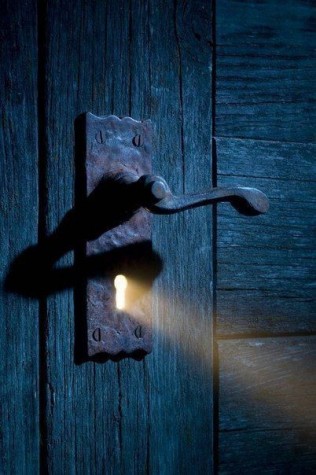 The heavy wooden door whined in protest as I tugged it open, the skirt of my robe swishing around my feet with the sudden movement. A sliver of candlelight slunk into my bedroom as I peered out into the midnight hallway.

All was dark but for a warm glow seeping from under the door leading to the cigar room, which I was forbidden to enter. A young girl had no business in a place like that, or so my uncle told me. It’s where men discuss politics and other affairs beyond a child’s understanding. Uncle’s adamant attitude toward the subject only made it all the more more desirable. I’d snuck into the room on many occasions, escaping notice from uncle and his guests by hiding in an old wardrobe. Much to my disappointment, I had never come across any information that interested me.

Tentatively, I pulled my bedroom door open wide enough for my person to slip through. My bare foot sank into the plush carpet, absorbing the soft sound of my footfall. Scanning the extensive hallway and all of its grandeur, I decided it was safe for me to approach the cigar room door without detection.

Crouching low, I sidled up next to the door and pressed my right ear to it, taking shallow breaths to ensure absolute secrecy. Uncle’s voice slid across my ears first, shortly followed by raucous laughter of a few other gentleman, none of which I recognized.

That was odd. Uncle only invited a select handful of professors to accompany him to the room to listen to his political tirades. Yet none of these voices sounded familiar.

“And how old did you say your Tabitha was, Professor Aitken?” inquired a rumbling voice.

Me? I’m forbidden to enter the room but they have the audacity to discuss me?

“Have I forgotten to mention it? She’s nearly sixteen, however she looks to be much younger.”

“Sixteen!” a tenor voice rang out. “And you’ve managed to avoid telling her? My son figured it out for himself when he was only thirteen.”

Before I could scramble back to my bedroom, the door had swung open and I fell forward, eyes staring at Uncle’s pair of perfectly polished shoes.