In the spirit of Halloween, San Clemente High School physics teachers and students are embracing the holiday festivities.

The week before the holiday, the annual Pumpkin Drop took place in between the quad and the pool. Physics students were allowed to show their creativity by disguising and protecting a pumpkin that was to be dropped by Mr. Young and Mr. Kerr. The purpose of this was to allow students to employ their knowledge of physics and put their creativity to the test to guard the seasonal item. 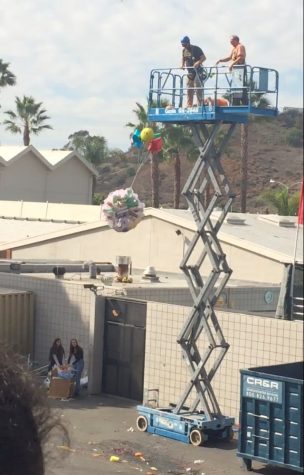 During the physics periods, the two teachers were risen in a scissor lift with several pumpkins about to be thrown to the ground. Those that don’t break receive extra credit, those that smash are left with no extra points. Multiple teachers around the school took their classes to watch the Pumpkin Drop, taking class time to get into
the fall spirit.

Lily Maranto, a Triton junior who participated in this year’s Pumpkin Drop, described the experience as, “really fun.” She added that, “I’m glad we took physics and were able to participate in the Pumpkin Drop,” but was disappointed that her pumpkin, decorated as a giant clown face and notable crowd favorite, cracked after the fall. If she were to go back, she would “put the pumpkin in the clown closer to the day of the drop so it would not rot and get soft” to ensure success.

Students used their best ideas to protect their pumpkins, going as far as building elaborate structures complete with balloons, bouncy balls, and boxes. They used principles of physics to hopefully secure the survival of their pumpkin.

The participants did what they could to keep their pumpkin from cracking, all while making it look good. Some of the projects included, but were not limited to, intricate designs of PVC pipes, structures resembling the house from the movie UP, and a detailed rocketship. The Pumpkin Drop is a special Halloween tradition at San Clemente High School so make sure to watch next year!