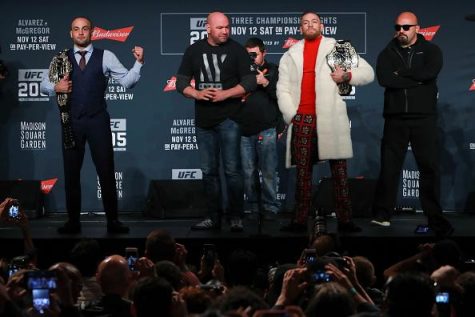 It was history bound to be made. The first time UFC had reached Madison Square Garden, Conor McGregor was given the shot to be the first champion to hold two belts in two separate weight classes (Featherweight and Lightweight).

MSG has been the haven for some of history’s greatest sporting events, from the Muhammad Ali vs Frazier to “The Great One” (Wayne Gretzky) retiring, and after New York had recently approved MMA to be conducted in their state, there was never a better headliner for the UFC to march into the Big Apple with.

“There was so much hype coming up to this fight. I honestly haven’t ever seen more funny trash talk in my entire life,” said junior Michael Lleiss when asked about McGregor’s bout against Alvarez.

This opportunity was originally afforded to him when he was offered a fight against Rafael Dos Anjos, the champion of 155 at the time, who unfortunately had to pull out due to a foot injury, which lead to the legendary McGregor vs Diaz saga. After a prolonged media tour filled with glorious trash talk one liners and memorable quotes, the time had come. Conor McGregor would be fighting Eddie Alvarez for his Lightweight title in hopes of making history.

For a fight of this caliber, McGregor was not met with much opposition. The bout started off with McGregor taking the edge in significant strikes landed. While Eddie trailed close by in strikes early on, the first advantage taken by McGregor was his early knockdown on Alvarez, which the champion rolled out of and recovered from. They continued to trade blows until McGregor caught him with a straight left that stunned him in the early middle of the round, but did not knock him down. Following only seconds after, McGregor hit Alvarez with a strong left to knock him down against the cage. After a series of grappling exchanges with Alvarez on the bottom, the champion recovered, and the striking battle resumed. Alvarez struggled in the thing that many analysts said would give him the win, which was his superior wrestling and grappling, specifically takedowns. As the round neared its end, McGregor stuffed a takedown attempt from Alvarez and they continued to box it out till the bell.

It was the championship round to end it all. Listening to his corner’s advice during the break between the action, Alvarez opened up the round trying to focus on his wrestling. He needed a takedown. Alvarez lead with an impressive shot, but despite the efforts, McGregor showed a superb defense and once again stuffed it. The round continued on, and Alvarez managed to trap McGregor in the clinch against the cage, yet the Irish man powered through and won the battle for control. As the striking continued, McGregor went as far as taunting Alvarez by putting his arms behind his back, and lulled him slowly into a boxing match. Alvarez swung a big right, which McGregor dodged, counterstroke, and followed up with a barrage of punches that inevitably TKO’d Eddie on the ground. History had been made.

“I don’t know how he’s going to be able to defend two belts properly,” junior Jake Nemeth noted when asked about the result.

Being a two world weight champion is a very big responsibility. If there’s one thing certain, it’s there is a lot of uncertainty for what lies ahead for McGregor. He has hinted to the media that he will vacate his featherweight title, most likely meaning his next  matchup will be against the 24-0 Khabib Nhurgamedov who has returned to action after many years out due to an injury. Khabib is an extremely serious threat with arguably stronger wrestling than Alvarez, which shined through on his early fight on the card where he manhandled Michael Johnson on the ground for 3 rounds till an inevitable submission.

Whether this fight happens soon or not really depends on McGregor, who has also hinted at a break in the foreseeable future due to the announcement that he is expecting a child with his long time girlfriend, Dee Devlin. Regardless of what he chooses to do, the ‘Notorious’ has a lot of options on his plate.

1 Comment on UFC 205: A Night of History in the Garden