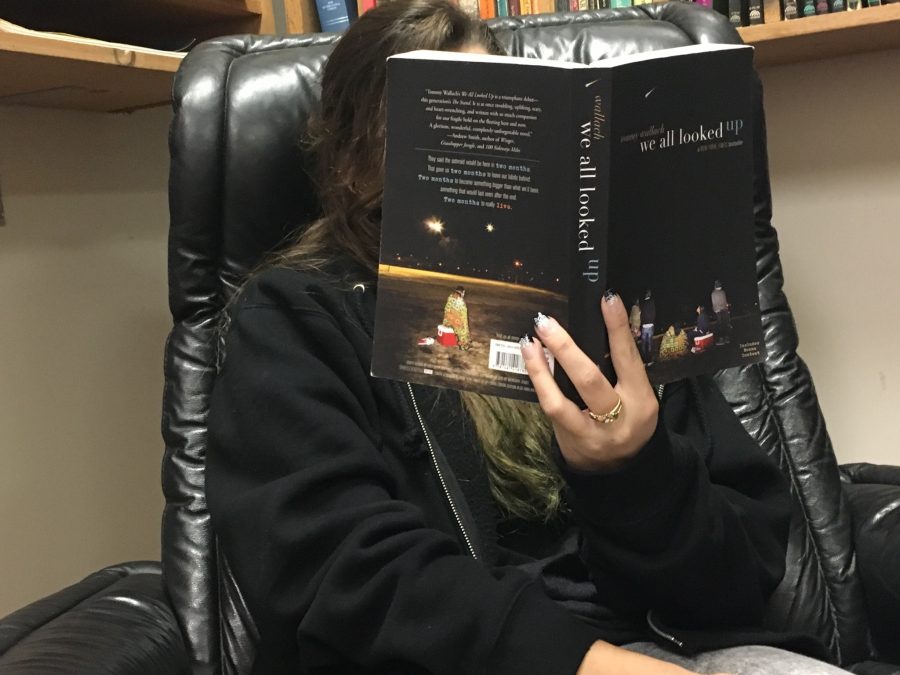 By: Hailey Griffith | Writer and Photographer

What would you do if your life was suddenly based on a 66% chance of dying and a 34% chance of surviving?

In the book We All Looked Up by Tommy Wallach, four high school seniors put their hopes, hearts, and humanity on the line as an asteroid hurtles toward Earth.

Each of their stories is told by Wallach in the most brutally honest way possible. All of the characters are seniors in high school, oh so close to graduating, that is if they aren’t blown to bits by their 66% chance of dying.

Peter, the jock, is stuck questioning what he’s going to do about his relationship with his girlfriend. Anita, “Ms. 4.0 GPA”, is stuck trying to be a people-pleaser, but follow her own dreams of becoming a singer. Andy, the slacker, can’t decide what to do with his life anymore, since his parents split up. Finally, there’s Eliza, the girl who all the rumors are centered around, and whose father is dying of cancer.

This book is categorized as a pre-apocalyptic fiction, which it is rightfully so, however some bits and pieces of the novel could actually happen in real life, and actually do happen in real life. Such as rumors being started around a person, a jock coming to a tough decision, a 4.0 student fighting for what they want instead of what their parents want.

The President of the United States (in the book it’s Barack Obama) informs the nation that an asteroid is hurtling toward Earth – he calls this asteroid “Ardor”.

Allie Stralheber, a freshman at San Clemente High School, recommended it to me, saying “It’s an emotional tear-jerker, but it’s worth it. Wallach could possibly be the next John Green when it comes to writing style, and horrific twists. A ten out of ten recommendation!”

Agreeing with Allie, junior Nicole Buscomb said “It’s honestly a tear-jerker, but it gave off a much different vibe from the title, but none the less I was surprised!”

All in all, I found the book very insightful, but also emotional. Wallach could definitely pull off being the next John Green with his style of writing and the way he words his sentences and their structures.

Sophomore Salah Ibreighith remarked,”The author is definitely like John Green…you can’t stop yourself from hating him, but you love to hate him. Like…y’know what I’m saying?”

“She looked up toward the sky, toward the implacable sparkle of good old Ardor, and saw that the two of them – she and the asteroid – were caught in a battle of wills. In that moment, she stopped being afraid of it, even dared it to come, because she knew there was no way it could crave death as much as she craved life”