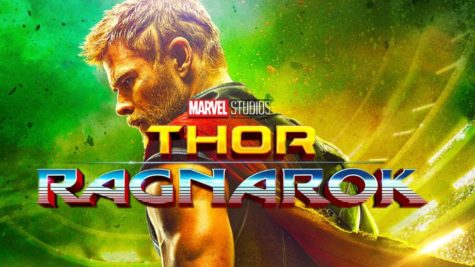 Thor: Ragnarok, the third installment of the Thor films (following Thor and Thor: The Dark World), was released November 3. In his latest quest, Thor must attempt to rescue the planet Asgard from his sister Hela, otherwise known as the Goddess of Death. In a race against time, Thor finds himself trapped on an unknown planet, and must reach home and save his people before Hela conquers his home world.

Compared to its prequels, Thor: Ragnarok was adored by critics, rated a 93% (273 reviews) on Rotten Tomatoes, compared to Thor’s rating of 77% (270 reviews) and its sequel´s 66% (251 reviews). While all the Thor movies have followed the  a similar plotline where Thor uses his control of lightning to save civilizations, most viewers found Thor: Ragnarok to be the best Thor yet, as well as one of the best movies in the history of Marvel’s productions. Iron Man, released in 2008, is the only Marvel movie to surpass Thor: Ragnarok’s Rotten Tomatoes rating, and only by a single point, coming in at 94%. Marvel’s The Avengers and Spider-man: Homecoming tie for third at 92%, with Guardians of the Galaxy right behind them at 91%. Senior Mikayla Hartigan claims “it was one of the best Marvel movies [she] has seen in awhile”. So what made Thor’s adventure so much more entertaining the third time around?

For one thing, there were some dramatic changes surrounding Thor. He is no longer dating his beloved Jane, whom he falls in love with and pursues in Thor, Thor: Dark World, and Marvel’s The Avengers. His mighty hammer Mjolnir, which he goes through great lengths to be worthy of in his original movie, shatters and becomes unfixable in the hands of Hela. Thor also loses his godly hair about halfway through the movie (this was probably the worst part of movie for me- how can you have the mighty Thor without his flowing, golden locks?). He even loses his right eye! By the end of the movie, Thor’s image has significantly transformed, as he becomes a closer embodiment of his father, Oden, than ever before.

But besides his haircut and golden eyepatch, Thor: Ragnarok is by far more light-hearted than its prequels. It includes an abundance of jokes and comical interactions between characters, as well as some head-banger rock songs that make any superhero battle that much more fulfilling. On top of that, there are no immensely dramatic deaths of “good” characters. While Thor and Loki’s father Oden does pass away, it is a spiritual scene in which he dissipates into light, and not one where he bleeds to death. Oden also continues to appear throughout the movie, lessening the effect of his death on the viewer.

Thor: Ragnarok also features a few other superheroes from recent Marvel movies, as well as introduces some new ones. Thor encounters Doctor Strange, another Marvel protector of Earth. He also encounters his old friend the Hulk, whom he both fights and later helps return into his human form as Bruce Banner. Any Marvel fan will likely say they love when Marvel heroes interact for the first time, and this movie adhered to this with comedy to spare. Two new characters are also introduced: Valkyrie, an alcoholic anti-hero who is an Asgardian like Thor, and Korg, a gentle giant with a large, rocky body but a sweet and pure personality. While Valkyrie adds elements of female empowerment and is overall just a fearless superhero, Korg adds an element of innocence and goodness that past Thor movies have lacked. Overall, Thor’s humorous interactions with these characters contribute to the movie’s highly comedic effect. Even as Thor and the Asgardians are watching their home planet burn down, Korg doesn’t fail to lighten the mood with his innocent nature and comical personality.

To top it off, Thor’s brother somewhat revokes his untrustworthy reputation as he makes his most promising attempt to help Thor throughout the movie. While Loki and Thor have had major family issues in the past, with Loki trying to take over both Earth and Asgard, Thor putting Loki in jail, and the overarching theme of Loki’s jealousy towards Thor’s superiority in Asgard, there were no major disputes between the two this time. Loki still possesses his sly and greedy nature, but in the end acts as a trustworthy friend and brother to Thor instead of completely sabotaging him as he does in past films.

While many viewers adored Thor: Ragnarok and its ability to be considered both an action movie and a comedy, not all Marvel enthusiasts were a fan of this production. Some argue that it wasn’t serious enough, and that there wasn’t enough emotion evoked within the audience. But junior Sofia Lopez, who has seen every Marvel film up to date, states, “I loved it! I thought it was SUPER funny and all the action scenes were well thought out. Also, I love Thor’s new haircut- it makes him way hotter.” Like Sofia, I believe Thor: Ragnarok was a masterful blend of comedy and great superhero action (but I really have to disagree on the haircut statement). However, I might be a little biased- Thor is my favorite Marvel superhero. So, go see Marvel’s latest and decide for yourself just how horrible or amazing Thor’s new haircut is (and the movie while you’re at it).