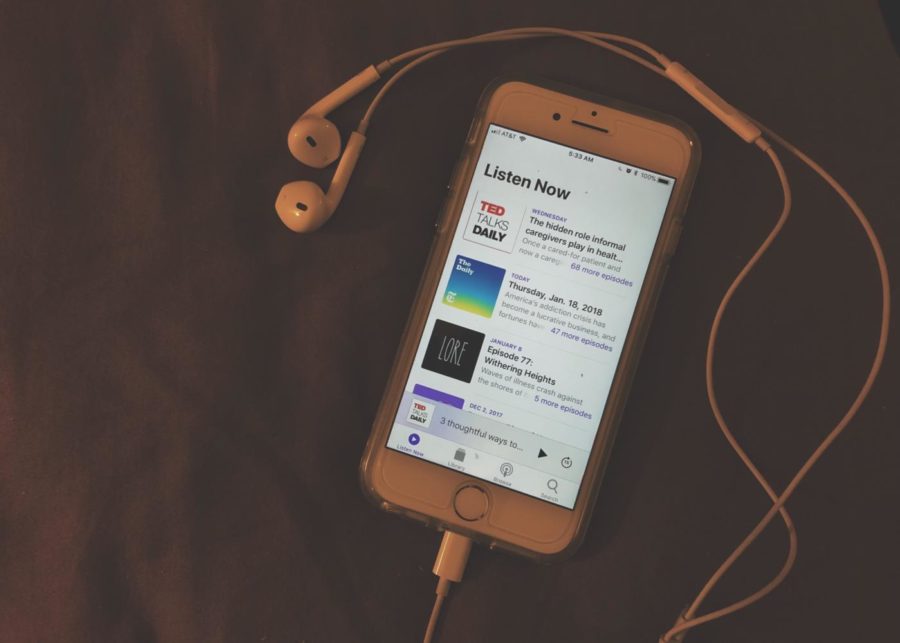 As newer and greater technology is developed annually, society’s trends surrounding this technology has continued to change as well. Each new generation seems to have closer ties with new electronics than the ones before. One example of this is the creation of podcasts and their growing popularity among teens and young adults.

While the idea of “audio blogging” dates back to the 1980s, podcasts didn’t became a legitimized and considerable invention until after the development of internet and playback devices like the iPod. In 2004, podcasts made their big debut and have been gaining popularity ever since.

So what even is a podcast? Google defines it as an episodic series of digital audio or video files which a user can download and listen to. It follows the same concept as an audiobook, but instead of listening to a novel, one is listening to a speech or other recording produced specifically for listening to or watching, not reading. Examples include daily news reports, recorded Ted Talks, or episodes of an “audio” show.

There are already dozens of genres to appeal to a variety of listeners. There’s advice, comedy, crime, education, female empowerment, history, horror, and sci-fi themes, just to name a few. You can choose to listen to Michael Barbaro speak for 20 minutes about the news on The Daily, or maybe to Sophia Amoruso speak about female success stores as she advocates for feminism on Girlboss Radio. Basically, podcasts offer more than just the “boring stuff”. Senior Grace White explains she believes “podcasts are an underrated piece of media that have the unique potential as an audio medium”. She believes many people would enjoy podcasts if they gave them a change. Her favorite podcast is Wolf 359, due to its “cinema-level quality in voice acting, story writing, and sound effects.” She explains, “It’s a compelling and slightly addictive mystery that constantly keeps you asking for more.” In other words, “history” isn’t the only genre of podcasts out there- there are plenty of other fish in the podcast sea!

But what makes podcasts so popular today? Other than their versatility and low pricing (most of them are free), they’re also portable. Many listen to podcasts during their daily commutes, during work breaks, while walking the dog, before bed- pretty much anytime you don’t have to listen to someone or follow directions, you can listen to a podcast. Senior Mikayla Hartigan, the president of orchestra, often has long commutes to get to her concerts. She likes listening to comedy podcasts like to help her relax before her performances: “There’s no better way to de-stress than a good laugh. Podcasts make that easy in the car!”

While many different age groups are listening to podcasts, they are favored by teens and young adults. I believe this is because generations like the Millennials (born 1980-1994) and iGen (born 1995-2012) are not only dependent of technology, but also exceptional multi-taskers. Many of us make coffee while taking phone calls and writing down notes, or we eat food while driving and listening to music. And because podcasts don’t require as much attention as activities like reading, they’re becoming a preferred method of entertainment for multi-taskers.

So whether you’re in need of a quick news update or are looking for a suspenseful mystery to listen to while driving to work, perhaps you want to give podcasts a go. They may seem like a lackluster activity, but I can tell you from my countless hours of podcast listening- they’re not. Their popularity wouldn’t be skyrocketing if they were!