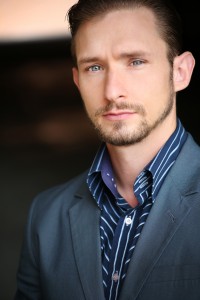 Young and determined, he harbors big hopes for this school year and is already on his way to achieving them. In this interview, I talk to Mr. Ingram himself, striving to learn more about the new leader of the SCHS drama team. After a quick introduction and explanation, I delve immediately into the questions:

What do you like to do in your free time?

When I’m not helping students understand the awesomeness that is theatre, I do parkour on the weekends. I have been practicing parkour since summer of 2008. I am also a certified WFPF parkour instructor.

How do you like working at San Clemente High School?

I really love it here. Everyone seems so supportive and connected. The best part of working here is the students. No seriously! I really appreciate how they balance their passion for theatre, while at the same time, they are taking AP and IB classes.

Personally, do you prefer to be on stage or behind the scenes?

There’s a big part of me that will always want to ham it up, being the center of attention. However, there’s something very rewarding about design and directing that pulls at me much stronger toward being behind the scenes.

Do you enjoy San Clemente?

What is your favorite play? Musical?

Not Grease! I’ve done it too many times to still like it. I can’t pick JUST one.

How do you feel about this school’s drama program?

When you say program, I’m assuming you mean everything drama: classes, International Thespian Society, annual productions, improv, Boosters, classroom, Triton Center, equipment, shop, etc. It’s very hard to come in and replace another teacher if their way of doing things is not what you are used to.

Honestly, the program needs some improvements. I want to integrate the classes, ITS, and performances so that things run more efficiently. I would like to see an official technical theatre class next year; dedicated to teaching the design and production processes of theatre. I would like to see more students who have taken theatre classes try out for the productions and take on more responsibilities and decision making. I also would like to increase the number of theatrical performances in our season. We are currently working on producing 2 Coffeehouse performances, starting a Comedy Sportz team, and having my advanced class put on a play each semester.

Why did you choose “Almost, Maine”?

I was hired late, and there wasn’t a lot of time to choose plays for this year. I had come up with a very cool concept for a theatre season, but because of the date change for the musical (which had traditionally been right after spring break), I couldn’t do the concept I had in mind. As a compromise with the other arts teachers, we decided to do Bye, Bye Birdie for the musical in March. With that as our musical, it didn’t really fit with my choice of fall play, so I picked something I had directed before, and I knew had a vignette structure. Because Almost, Maine is basically 9 scenes, I knew it would be easier to plan rehearsals, and that students would be able to memorize lines faster. Plus, it’s a very cute show that is very popular with high school students.

How has this production, as an experience, been?

In general, things have been running smoothly, and I feel very confident about the casting choices by myself, and our guest judge, Bob Burns. However, now that we are 2 weeks away, I am coming to realize that last year’s shows put us behind schedule. At the beginning of the year, the stage was littered with desks, and the sets from the last musical as well as a concert were just left on the stage for me to clean and organize. If the stage had been struck after those shows, we would be 2 weeks ahead of schedule in terms of set construction.

Mostly, off-broadway, but I am a fan of some musicals, and that’s really what’s great about broadway.