This is not the first time smiling teens have extended their arms in the notorious Nazi victory salute. In November of 2018, a photographer captured Wisconsin’s Baraboo High School Class of 2019 also raising their arms Seig Heil, jovial grins stretching broadly across the boys’ faces as the camera immortalized the moment. 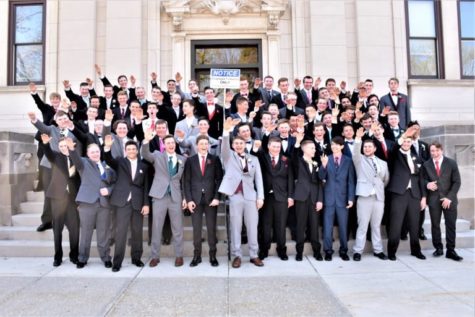 Similar to the Wisconsin scandal, many parents and teens took to social media to openly criticize the actions of the Orange County students and report those identified in the picture to their respective schools, creating a viral controversy about what consequences should follow in the wake of the incident. Many students at San Clemente High School spoke out about the issue, for the most part condemning the actions of the students.

“How can they not know they were doing something wrong?” sophomore Griffin Donnelly said. “That’s like, the main thing we’re taught in history classes.”

The photo struck a painful chord in Ryan Baxter, a senior at SCHS.

“This issue hits particularly close to home,” Baxter said. “My girlfriend is Jewish and any sign of antisemitism makes me incredibly frustrated. The fact that anyone can see this as ‘funny’ or a ‘joke’ is disgraceful and it’s a sad reflection of where we are as a society.”

“At first, I wasn’t surprised that high school kids did such a thing. I was more surprised at how much publicity it got, to be honest,” senior Bradley Simone said. “A lot of kids draw swastikas, make Hitler jokes, and do the Nazi salute on a regular school day. In many of the boys’ bathrooms, you’ll see swastikas all over the place on the wall. It’s nothing surprising.”

If students are more surprised by public outrage rather than shocked at the implications of such a photo, joking or not, what does that say about the current state of society? What is spawning this blatant apathy toward a symbol of pain and suffering endured by the Jewish commonwealth? More importantly, why is the Hitler Youth a sudden trend across the United States and why is it afflicting SCHS?

The answer is complex and twisted. The problem extends far deeper than just pictures at parties or on the steps of a county courthouse. It’s rooted in a history of hate and a mounting feeling of nonchalance about prejudice. 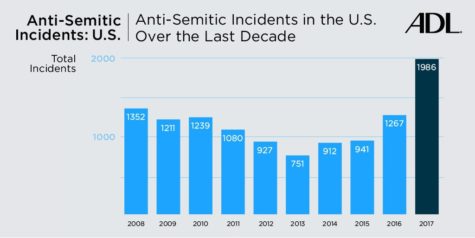 The polarized social climate of 2019 has generated a general indifference and passivity regarding hate crimes, school shootings, and other popular horrors of the time. Students grow more and more desensitized to events usually greeted with reactions of shock and despair. The repeated exposure to violent events diminishes the ability to react in such a way, even as these events grow increasingly more frequent.

When it comes to antisemitism, incentive to take action against it is lacking.

According to an annual report by the Anti-Defamation League, anti-semitic incidents increased 35 percent in 2016 and 57 percent in 2017. In November 2018, the most prominent anti-semitic incident took place at the Tree of Life synagogue in Pittsburgh where a shooting by white terrorist Robert Gregory Bowers left eleven Jewish men and women dead and seven others injured.

The cups on Sunday, the salutes on the steps, and the shooting at the synagogue are all forms of hate and hate has no place in our bathrooms or classrooms. It has no place in the hearts of our student body and it certainly should have no place in San Clemente.