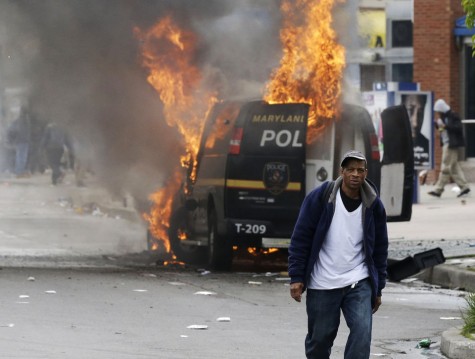 Posts, pictures, and videos surfaced in the last few weeks throughout social media detailing the chaotic riots in Baltimore. Many people, however, are unaware of the background information that caused the riots in the first place.

The Baltimore riots erupted after six police officers in Baltimore allegedly killed a 25 year-old African American man named Freddie Gray. They apprehended and arrested  Gray on April 12, 2015 on account of possession of an illegal switchblade. While Gray waited in a police van to be transported to jail, the police officers brutally beat him, inflicting severe spinal and neck trauma. When the officers realized his dire need for medical attention, they called an ambulance to transport him to a nearby trauma center. In the hospital, doctors declared that Gray had fallen into a coma.

April 19th, 2015, exactly one week after his arrest, Gray died in the hospital. The police force suspended the six officers temporarily with pay. As soon as doctors released the details of his death that indicated homicide, Baltimore’s chief prosecutor, Marilyn J. Mosby,  tried the officers in court with offenses ranging from illegal arrest to manslaughter. The investigation revealed that the alleged “switchblade” was merely a spring-loaded pocketknife that Maryland codes deem legal.

On the streets of Baltimore, demonstrators demanded an end to the racial profiling that caused the death of the innocent 25-year-old man. The protesters rallied for justice and new policies to keep the police force more accountable for their actions.  However, after the mild demonstration at the City Hall, the crowd marched toward Oriole Park, and the demonstration became very violent.

In recent months, there have been several cases of policy misconduct and brutality captured on film and spread throughout social media, showing police officers unjustly attacking citizens instead of protecting them.  Freddie Gray was not shot by the police but was injured and denied medical attention. Given that he did not commit any crime and there was no reason for his arrest, the injustice reignited old frustration about police brutality from recent events like the death of Michael Brown in Ferguson.

Disfranchised young people in Baltimore, chanting “no justice, no peace” viewed the Freddie Gray incident as evidence that their lives do not matter to the police and to the government officials who had sworn to protect and defend their rights.

In a television interview, one of the protestors said that this is not about black or white, but rather about “blue,” referring to the police oppressing people in poor and black neighborhoods in Baltimore.

People protested the injustice of what happened to Freddie Gray, because they identified with him and could see how they too can be the next jailed, injured, or killed person. This fueled the rage among protestors.

Many criticize the media coverage of the case for focusing more on the sensational aspect of violence rather than recognizing the economic and educational problems in poor areas in addition to the issue of police brutality.