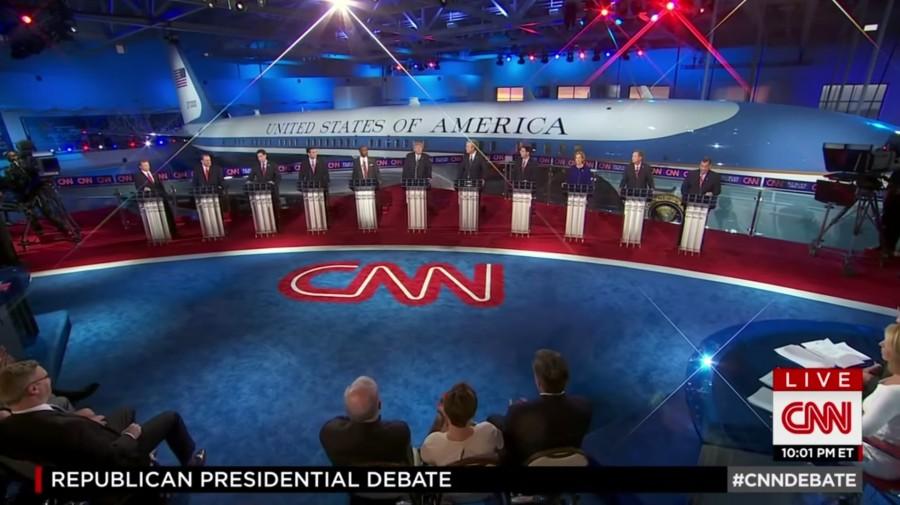 Held at the Ronald Reagan Presidential Library last week, the upcoming 2016 presidential election race saw its second Republican debate, consisting of eleven candidates and lasting approximately three hours. Hosted by CNN, this event proved to reveal many contenders’ strengths and weaknesses, from the ideal Republican views of Carly Fiorina to the immature insults of Donald Trump. Ranging from topics of Planned Parenthood to foreign policy, this affair was on that left nearly no stone unturned.

Overflowing with competitors, the Republican party is more than crowded by possible presidential candidates. This debate was attended by all eleven, including Jeb Bush, Ben Carson, Chris Christie, Ted Cruz, Carly Fiorina, Mike Huckabee, John Kasich, Rand Paul, Marco Rubio, Donald Trump, and Scott Walker. However, and although the several rivals, the obvious front runner of the night was Carly Fiorina.

The only female Republican runner demonstrated her abilities well during this debate. By appealing to conservative roots and giving answers in a well-executed manner, Fiorina clearly established herself. Her passionate argument against abortion and the destruction of Planned Parenthood rang clearly to the event’s viewers, and won Fiorina a raise in support. She also challenged Donald Trump for his false credibility and childish actions, as well as outlined ways wherein she would handle international affairs.

Another significant candidate of the night was Jeb Bush. He continuously connected himself to his strong family legacy, reminding viewers that his brother, past president George Bush, “sent a clear signal that the United States would be strong and fight Islamic terrorism, and he did keep us safe.” However, this tactic of attachment may prove harmful for the Republican contender in the future, for he may seemingly become simply another version of his brother.

Many agree that it was Donald Trump who was the most entertaining of the whole event. Although he was able to pack in a lot of witty comments and arguments to his fellow candidates, he still maintained a strong level of cringe-worthiness throughout the night. For instance, he claimed that Jeb Bush’s Mexican-American wife was the reason for his support for a comprehensive immigration reform. Bush replied that was inappropriate for Trump to have said such a thing and asked him to apologize, but Trump declined. Additionally, in a comment to Rolling Stone magazine, Trump remarked that Fiorina’s face would make her “unelectable.” She then criticized his comment by simply stating “I think women all over the country heard very clearly what Mr. Trump said.” During the debate itself, he awkwardly stated that she was actually “beautiful.”

Conservative analyst Mercedes Schlapp stated that Trump was “speechless […] uncomfortable talking about any issues except for immigration.” He conveyed himself as someone who was loud in his ideas, yet had no actual support to his points.

Throughout the debate, multiple candidates made false claims about topics such as immigration, Hillary Clinton, and vaccines. Trump exclaimed that vaccination apparently results in a child “becoming” autistic, though the nonexistent evidence to support this notion. Carly Fiorina stated Planned Parenthood videos had shown “a fully formed fetus on the table, its heart beating, its legs kicking while someone says we have to keep it alive to harvest its brain…” despite the scene not being in any of the videos. Also, though Clinton has the authority to delete personal emails, Mike Huckabee went as far to say that she was “under investigation by the FBI” due to the fact that she “destroyed government records” Additionally, Marco Rubio attempted to explain the idea that U.S Policies to fight climate change would “do absolutely nothing.” However, experts say that if the U.S were to take charge on the issue, other nations would follow suit.

All in all, this debate was one that had few stars, and many quiet participants. The arguments, points, and ideas showcased by this event and its participators’ abilities defined the possible ways in which the Republican candidacy may sway; whether conservative viewers are willing to go for the more extreme or dulled standpoints.