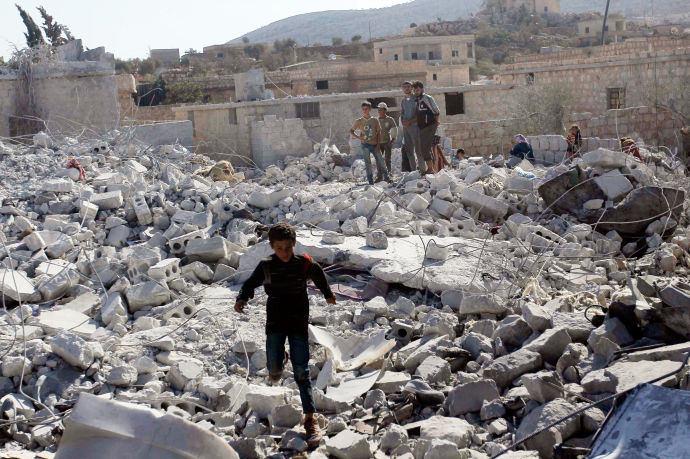 Over the past few years, Syria has plummeted into a state of absolute war. From rebel brigades to government forces to religious extremists, the country itself is in a state of disorder unlike any other. Millions of people have been killed, and millions more have been displaced within the country and are consequently, at great risk. From the brutal fighting within Syria to the torturing of civilians to the massive refugee movement, this war has mushroomed from a civilized one to one of epic proportions.

The crisis in Syria began in 2011 with the arrest and torture of rebel teenagers who graffitied their school with words of  revolution. Pro-democracy protests in the southern city of Deraa followed, and exploded into controversy when government forces shot and killed many of the demonstrators. This provoked a nationwide outrage; protesters across Syria ordered for the resignation of President Assad. Taking no heed from prior events, government troops repeatedly utilized force to suppress the revolts–causing further shock and the rebel brigade’s arming of themselves. What had been a revolt against an oppressive leader transformed into a bitter civil war in which rebels and government armies battled over the command of different Syrian regions.

By 2012, combat reached the capital city of Damascus and had caused innumerable deaths. As time went on, however, the war in Syria was no longer civil and the cause was no longer just over an oppressive government. Pitting the Sunni against the Shia Alawite, this battle took on a religious nature, which strengthened the Islamic State presence in the north and east. Additionally, the UN has recorded over 220,000 casualties as of March 2015. A war within wars, Syria has become the battleground for more than simply rebel brigades and government forces. With the presence of jihadist groups such as ISIS, Syria’s state of stability and safety is nonexistent.

The nature of this war has evolved with time. It has become a bitter fight for control of areas, putting the lives of civilians in great danger. Both the government and the rebel contingent stand accused of multiple war crimes–from rape to enforced disappearances to targeted massacres. Instances of stopping civilians’ access to food, water, and health services have been recorded on either side and civilians have been subjected to bombing, as the government has taken to barrel bombing rebel-held civil regions. Furthermore, ISIS’ occupancy of the north and east has proved to rid the area of its safety. On the mission of utter conformity and destruction, ISIS implements a policy of severe punishment towards those who violate their reign. With public executions and amputations, as well as mass killings and beheadings, ISIS has widened their target margin from Syrian civilians to opposing forces, religious minorities, and Westerners.

August of 2013 marked a large development within war tactics. Following the deployment of deadly chemical missiles upon civilian occupied regions causing hundreds of deaths, a “whodunit” situation arose. The Syrian government, as well as Russia, pointed their fingers to the rebel brigade. Rebels and Western powers accuse the government of involvement. In order to pacify the United States’ outrage, President Assad implemented the entire eradication of all Syrian chemical weapons. This was completed, with the help of the UN, last year. However, the usage of toxic chemicals by the government were recorded in July of 2014.

Furthermore, as this war has evolved into a much greater beast, the rebel brigade has followed. Now greatly overpowered by religious extremists, such as Islamists and jihadists, worry and episodes of fighting have developed within the rebel force. What once was a single rebel group has split into a fight for supremacy; the strongest group currently being the National Coalition for Syrian Revolutionary and Opposition Forces. Although this group is “supported” by Western powers, in a ghostly sort of support, it has little backing in Syria itself. Taking advantage of this apparent disorder within Syria, ISIS now controls the majority of the north and east regions.

This war in Syria is no longer a revolutionary one. It has exploded into epic proportions, ranging from battles between rebels, jihadists, the Kurdish, as well as the government force. Fighting occurs amid all components; no one part is particularly loyal to another.

September 2014 marked the first U.S. military involvement; airstrikes on the ISIS strongholds within Syria were executed in order to eliminate the extremist force. However, last year, the United States, Russia, and the United Nations attempted to instate the Geneva Communique. This act would have completely changed Syrian government although it failed. Overall though, politically, Syria is currently in a state of ceasefire so far unchallenged and unchanged.

Just last month, Russia asserted its power within Syria. On October 7th, twenty-six missiles were shot at eleven targets. All targets were destroyed. For two months, Russia has been implementing destructive airstrikes across Syria, firing at what are claimed to be ISIS targets and rebels. Records of civilian deaths due to Russian airstrikes are also known. Rapidly, Russia is advancing Syria’s war into a new level of international affairs.

As a product of the heavily violent war raging within Syria, millions of its people have been forced to flee. Surrounding countries such as Lebanon, Jordan and Turkey stand as the main destinations for refugees, even though these countries remain resistant.

Baily Donlin, a junior, disclosed, “I believe that neighboring countries should be more willing to take in refugees and provide them with at least the basic necessities to live. We’re all human.”

However, in more recent times, Syrian refugees have begun to trek into Europe, hoping for entry into Germany and Austria. This has produced mixed reactions. Some Europeans openly welcome the refugees, while others advocate for the complete closure of their country’s borders. Furthermore, the concerns of overcrowding, as well as economic burden, have restricted the openness of European governments.

“There is no concept of refugee in the Gulf states, but these Syrian neighbors should open their borders. Not only is it a moral obligation, it’s also practical, as Gulf citizens have much in common with Syrians,” Chris Nicol, a junior, rationalized.

Within Syria’s borders, citizens have suffered a $202 billion loss, as of March 2015. For every five Syrians, four live in poverty, with a thirty percent margin living in extreme poverty. Government systems, as well, are collapsing– education, health, and social welfare are nearly nonexistent.

As this war has developed, so has its crimes. Civilians are wedged between opposing sides, and are oftentimes the recipients of heinous crimes from all sides. From enforced disappearances to chemical warfare to “accidental” civilian casualties, it comes as no surprise that the exodus of people from Syria rivals the migrations following WWII. Humanitarian organizations such as the UN have recorded at least 4 million refugees, and around 7.6 million people are displaced within the country. In total, 12.2 million people, including 5.6 children, urgently need humanitarian care in the form of food, clean water, and shelter.

“This is a generation that needs saving,” junior Jahfreen Alam said. “That group of children is extremely affected by this, and they possibly have the ability to change the future for the better. By not doing anything, we’re inherently harming ourselves.”

Great alarm has been raised since the discovery and recording of thousands of so-called “enforced disappearances.” Men, women, and children in Syria are regularly abducted from their homes and workplaces by both government officials and the rebel brigade. The majority of kidnapped peoples are fighting-age men, taken by either side recruited for forced combat. After being snatched, persons are then taken to detention facilities where they are beat, tortured, and even killed. The captured persons can be illegally held for years with zero contact with their friends or family. In 2011 the United Nations established the Commission of Inquiry on the Syrian Arab Republic in order to document war crimes from either side. Since then, approximately 85,000 people have been arrested subjectively, 2,600 have disappeared completely, and 1,200 are being detained by armed forces.

Syria is in a state of chaos. At this point, many humanitarian organizations, such as Amnesty International and CARE have devoted their focus to assisting those displaced within the country itself. Millions of lives are at stake. Many believe that the only remedy to Syria’s war is a political shift- yet no one group is strong enough to implement this change. Unfortunately, only time can tell.