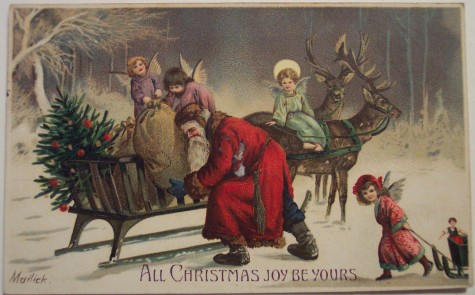 Clothed in a red suit with a white fur trim and big black boots, accompanied by a mob of little elves and reindeer, and recognizable by his stylized laugh, Santa Claus is an image held tightly in the hearts of children internationally. The entity that brings gifts in exchange for proper behavior, Saint Nick is commonly associated as the trope of the Christmas season. Prevalent in music, movies, novels, advertisements, and so much more, when it comes time to decorate a tree, St. Nicholas is inescapable.

However, where did Father Christmas come from?

The tale of Kris Kringle originated in Patara, Turkey in about 280 A.D. with the birth of St. Nicholas. A man famed for his incredible kindness and religious reverence, St. Nicholas is fabled to have given away all of his inheritance to the needy. Another story explains that the kindly man spent his life trekking across surrounding regions to aid the impoverished and sick. St. Nicholas’ most well-known attribution, though, comes with his saving of three otherwise doomed sisters.

Desperate for money, a father decided to sell his three daughters into slavery. When the Saint caught wind of this notion, he paid the rash father a dowry for each sister, allowing them to be married and avoid enslavement. This, combined with his undying kindness to the destitute, led to the creation of a holiday on the day of his death, a feast eaten every December 6th. Even throughout the Protestant Reformation and times of religious turmoil, this tradition was maintained.

On a wider scale, the popularity of St. Nicholas was introduced into American culture around the time of the Revolution, in the years of 1773 and 1774. During these years, New York newspapers printed stories concerning Dutch families and their extravagant celebrations on the day of St. Nicholas’ death, December 6th. This trend caught on and many Americans adopted this tradition, referring to the Saint as “Santa Claus,” an altered version of his Dutch namesake, Sinter Klaas.

The celebrity of Santa Claus was solidified in the early nineteenth century. After gifting his fellow New York Historical Society members with wood engravings of the Saint, John Pintard initiated a custom that remains even today. Additionally, Washington Irving, in his novel titled The History of New York, referred to the man as the patron saint of New York. However, in Irving’s version, Santa was a ‘rascal’ who wore a blue three-cornered hat, red waistcoat, and yellow stockings.

Even though the spirit of giving that surrounded Mr. Claus, St. Nicholas and his legacy did not become attached to Christmas until the mid 1800s. After gifting gained popularity as a Christmastime tradition in the early nineteenth century, many newspapers designated ‘holiday’ sections wherein manufacturers utilized Santa Claus’ jolly image to advertise their product. A Philadelphia store in 1841 attracted thousands of children to their live-size version of Kris Kringle, inspiring shops across the nation to employ real-life Santa Clauses. Also, during the 1890s, the Salvation Army began dressing their charity solicitors in Santa Claus suits, which is a tradition that remains even today.

The image of Santa Claus as a jolly old elf with a red nose and a stomach of jelly was first formed by Clement Clarke Moore in 1822. His poem, “An Account of a Visit from St. Nicholas” detailed the characteristics that are seen in modern day Kris Kringle, from his red suit to his roaring laugh to his eight reindeer that aided him in delivering gifts to ‘deserving children.’ Junior Shea Donnelly reminisces on her memory of the Christmas spirit, explaining that “Santa was my hero when I was little, and every Christmas my brothers and I would write elaborate letters to him, thinking it would get us more presents.”

Moore’s image became concrete when famous political cartoonist Thomas Nast based his drawing of Saint Nick on the descriptions provided by the poem. Published in Harper’s Weekly in 1881, this illustration of Sinter Klaas emphasized his stout body and allowed him a wife, an army of elves, and the love of children far and wide.

The legend of St. Nicholas is not explicit to the U.S., however. A multitude of Kris Kringle variations can be found across the planet. Scandinavian countries wait for the elf Jultomten to arrive by goat-led sleigh and leave gifts. The English speak of Father Christmas and his habit of filling stockings with treats on Christmas Eve. France sets their shoes out in hopes of Pere Noel stuffing them with gifts. Russia and Italy both await a visit from a women, though each differs in purpose. Russian folklore tells of Babouschka, an elderly figure who maliciously led the wise men away from Bethlehem and Jesus. However, regrets overtook her and on every January 5th, Babouschka travels to the homes of all Russian children, leaving gifts in hope that one will be baby Jesus and she will be redeemed. In Italy, though, La Befana navigates by broomstick through the country to bestow toys upon deserving children.

From the late 1800s on, Santa Claus’ image and story has been molded into one of a good, jolly elf man who lives to reward children who behave well. His likeness is found in movies, television, novels, advertisements, and the heart of Christmas itself; unquestioned traditions such as leaving him milk and cookies and visiting him at department stores stand as the center focus of Christmastime. For many, Santa acts as an embellishment to the spirit of the season, a furthering of the feeling of generosity that comes with this time of year. In the words of junior Baily Donlin: “What’s better than a jolly old man bringing you presents?”