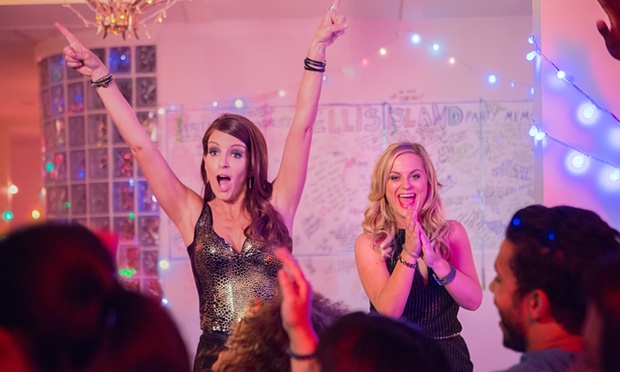 A few weeks before entering the new year, Tina Fey and Amy Poehler debuted their blast-from-the-past comedy, “Sisters” on December 18. Raking in almost $14 million dollars just in the first weekend alone, the film placed Poehler and Fey are back at the top of the comedic industry.

Eight years after the release of their last movie “Baby Mama”, Poehler and Fey reunite as the infamous blonde-brunette dynamic duo, taking on the roles of two sisters trying to have one last hoorah before the sale of their parents’ home. The duo are given the task to clean out their childhood bedroom, a seemingly difficult task for two 30-something year old women. Remembering the times when they used to have “Ellis Island parties”, sisters Maura (Poehler) and Kate (Fey) Ellis advertise the final bash on Facebook, reaching out to all their childhood friends to have what they hoped would be a massive party. With the arrival of a DJ and a drug dealer played by John Cena, the party turns from a quiet get-together into a “major rager.” The movie, following the course of the party, holds a few expected outcomes with issues of house destruction and calls from parents during the bash. Learning that their parents had scheduled the final inspection for the sale of the house on the following day, Poehler and Fey work to clean the house but have to overcome delinquency of party-goers with paint in the pool filter, fallen trees, and sinkholes. The duo is able to pull through though, cleaning the house and selling the house, only to buy a different, quaint house in Florida.

Poehler and Fey, mostly known for their comedic genius, did not fail to make the audience laugh in the slightest. Even though the movie is rated-R and rightfully so, the comedic comments and events save the tackiness of a blast-from-the-past party from making a terrible movie. Junior Shea Donnelly claimed that, “Even though a lot of the movie wasn’t exactly school appropriate, a lot of the one liners were hilarious.” Poehler and Fey put on an excellent performance that had the audience laughing and telling everyone they know to go see it in theaters.

Even though students and much of the broader audience couldn’t stop the tears from falling out of their eyes from laughing so hard, critics didn’t agree. Several critics claimed that the movie was one to watch “when you run out of TV to watch” or that the crude comedy did nothing to keep the movie from dragging out longer and longer. Critics called out the “bad directing,” “bad writing,” and “bad comedy” of the movie, defending that the movie was ultimately a disgrace to big-screen comedy. Seeming to follow in the footsteps of movies such as “Bridesmaids” and “Step Brothers,” Poehler and Fey, despite being taken down a few notches by reserved critics, pulled off a comedic wonderment.

Despite an excessive amount of vulgar language and rated-R scenes, “Sisters” is one movie that students would definitely recommend. “Sisters is one of the funniest movies I’ve ever seen. I even saw the movie twice in one week, so I would definitely recommend the movie to anyone looking for a great laugh,” noted junior Sara Barnes. Catch Poehler and Fey’s comedic masterpiece in theaters now!