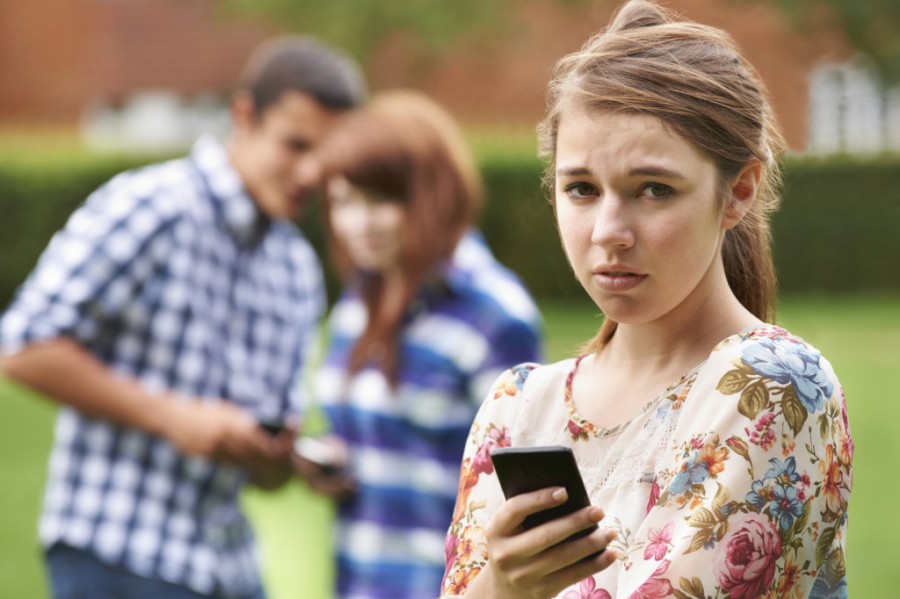 By, Claudia Pacheco  |   Editor in Chief

Browsing through Snapchat, we all crack up watching a friend’s story that mocks an absurdly dressed stranger or catches someone off guard making an unattractive face. Snapchat equips everyone with an audience to entertain through their 24 hour endeavors. However, this ephemeral free-flow of content often crosses the line between poking fun and bullying.

Recently, I clicked on the story of a local jokester, expecting a cleverly-captioned meme or the ol’ prank video. This time, the recorder and his friends centered the camera on a younger boy sitting alone at lunch. They asked him questions about his experience at lunch. Knowing the senior behind the camera, I discerned his sarcasm. The younger boy, presumably a freshman or sophomore, did not seem to notice. 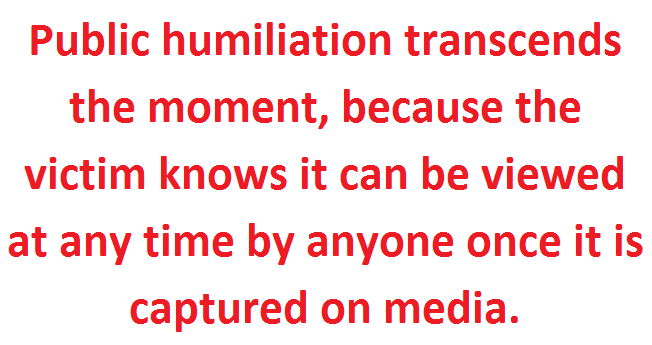 The short clip disappeared underneath my fingertips, and I rolled my eyes and continued scrolling through the list of stories on my feed.

Two days later, I tapped his Snapchat story again. He was targeting the same boy sitting alone. The intimidating senior’s voice mocked him more obviously this time and laughed as the younger kid struggled to respond to his questions. The small-statured student’s face revealed his anxiety and insecurity. I struggled to watch as he searched for a way out of the situation to no avail.

Adding to the younger boy’s humiliation was the mystery of phone recordings. “Is the video going on Snapchat or Instagram for hundreds of other kids to laugh at me?” “Will he keep that video of me and show it to more people tomorrow, or next week?” Internet humiliation takes the classic case of bullying to a deeper level of malevolence.

Throughout the rest of that day, the few seconds of that video kept replaying in my mind. I brooded with both anger and confusion. I envisioned how the boy must have felt in the moment and pictured him coming home from school – day ruined. Sitting alone at lunch sets anyone up to feel singled out, and the ridicule from an older, intimidating Senior is enough to push them over the edge.

So … did I confront anyone? Did I Text-A-Tip? Nope. I mulled over the scenario over and over, yet I did not act. Without realizing it, I assumed the role of cyber bystander.

The next day, the senior Snapchatter walked into my fifth period class laughing, “Hey, did you see my Snapchat story? That dumb kid got so mad he tried to lunge at me and punch me.” He also mentioned that a teacher witnessed the altercation and forced him to delete the video. Because of the teacher’s interception, the senior did not bother the younger student again.

Finally, I had my chance to talk to him about it. I asked him why he targets a boy who sits alone at lunch every day. I asked him in a non-aggressive, casual tone, “I just don’t get it…what’s the point of kicking someone when they’re down?”

His response was simple, “Because it’s funny.”

Whether the cause of Snapchat ridicule is the glorification of shocking and insensitive humor, or simply the classic case of high school bullying, the recording of someone with a phone ostracizes them more than does traditional bullying. Public humiliation transcends the moment, because the victim knows it can be viewed at any time by anyone once it is captured on media.

Ultimately, one can bring up that the victim has the options to Text-A-Tip or tell a teacher. But is it always someone’s first instinct to admit their vulnerability when they already feel so embarrassed?

After experiencing such vicious ridicule over Snapchat, I realized that being part of an online audience through Snapchat or Instagram makes us bystanders. Even though we view the situation over a screen, we must act if we were standing around and watching it happen in real life. Rather than brood over how “screwed up” that video was after watching it, I should have texted a tip myself or told a teacher.

As cyber bystanders, we tend to hesitate more than we would if we were watching the situation in person. In person, we feel the emotion and are more likely to step in and say something or call a teacher over. Looking at it from behind a screen takes us away from the situation, allowing us too much time to reconsider stepping in.

The day after I watched the story and my emotion subsided, I admit to wavering between the, “Should I step in and protect the kid” or “Is it my place to get involved?”

Now, the answer is clear to me. I was partly responsible for letting the bullying get as far as it did. If I stepped in like I originally planned to, I could have prevented the senior from antagonizing the boy to the point of the victim resorting to violence to defend himself.

With “Cool 2 Be Kind,” Text-A-Tip, and various other anti-bullying organizations on campus, SCHS is a safe-haven for many students compared to other high schools. However, whenever we become bystanders, especially through media, we must take initiative and take advantage of those groups ourselves. We must catch ourselves before we hesitate to Text-A-Tip or tell a teacher. It is not just the victim’s job to seek out the help.

Thank you for reading, and I hope you can learn from my experience and regrets.

2 Comments on When Does Snapchat Go Too Far?