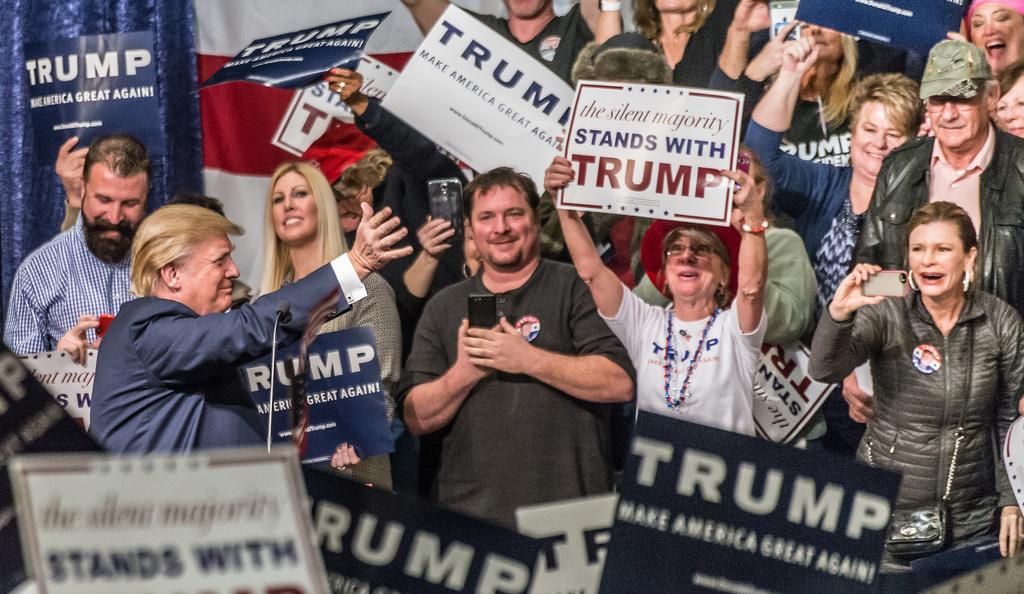 It is 2008. Throngs of people cheer feverishly as the youthful and charismatic junior Senator Barack Obama claims victory in the general election. In spite of the disillusioning nature of the second Bush administration, there appears to be hope and healing on the horizon for a politically fractured nation in the heat of war. People are enchanted by Obama’s eloquent speech promising progress and change in the form of a reformed Washington.

Eight years later, this optimism has seemingly evaporated. The country has been stricken by two government shutdowns, a debilitating fight over an unpopular healthcare bill, and a struggle to handle Iran, Syria, and the removal of troops from Iraq and Afghanistan.  Obama, aged by two long terms, has found the task of reconciling Congress a challenge he is not able to overcome. Disillusionment is rife, with earlier language of hope and aspiration replaced with an embittered rhetoric declaring the establishment a poison. The government has found it is unable to reconcile within itself and with the public. Loud, strong voices slinging verbal shots meant to kill have filled the political vacuum created by America’s mass disenchantment with what is largely thought to be a crippled government.

This election cycle has been fraught with political fragmentation of both parties and a deepening disconnect between government and the populace. It has been a cycle marked with sharp swings left and right as the moderate finds his or herself increasingly alienated from the American voting body. The populist and somewhat extreme  rhetoric of Donald Trump, Ted Cruz and Bernie Sanders, all considered anti-politicians, has shaken the core of both the Republican and Democratic parties, both which have been hurt by the stalemate in Washington and the ascension of other world powers capable of competing with the United States as the general American grows more radicalized. This election will have global implications, as albeit Bernie Sanders will likely lose the Democratic nomination to the more moderate Hillary Clinton, Donald Trump is poised to become the GOP nominee for the general election. The prospect of having someone who has claimed he will build a wall spanning the border of Mexico, deport millions of Hispanics and Muslims and condones contentious opinions regarding race and religion assuming the role of “leader of the free world” concerns many of America’s allies even as rightist movements also take hold these nations.

Nonetheless, the more pressing implications are domestic, with this election cycle calling attention to civilians’ growing distaste for political correctness. Merriam Webster defines this phrase, which is often prone to misrepresentation or undertones of personal sentiment, as “the idea that people should be careful not to use language or behave in a way that could offend a particular group of people.” Ariana Winsten, 10, finds that political correctness is important for this very reason, as it prevents politicians for “unnecessarily offending lots of people.”

As the Washington stalemate has intensified, many have transformed this simple and unassuming  phrase into a dsyphemism synonymous lack of transparency and efficiency. It has been the mark of a typical politician in a time when typical politicians are generally despised. Such sentiment has enabled the rise of radical candidates such as Trump and Cruz under the guise of them being the most obsolete contradiction of Washington’s politicians. It has enabled extreme remarks to be construed as authentic and a symptom of someone willing to be honest with the American people.It has been a dominating argument against the “ideological toxin” of compromise, something particularly disliked in the GOP base.  In an age in which the politician is revolting, people have reached out for something far more dangerous than the run-of-the-mill legislator: someone who is able to inject radicalism into the mainstream simply by condemning Washington, creating a political incorrectness that is just as artificial and meant to eliminate as the trend it is opposing.

In a democracy, the political pendulum swings left and right routinely throughout history, as the population becomes tired of one strain of thought and embraces the other. Thus, it is reasonable to assume that as the American people shift between favoring the liberals and conservatives they will also shift between supporting traditional politics and more roguish brands. However, the typical American will have to strain their memory to remember a time when the shift was this divisive and radical.  Political incorrectness has become the new norm, with Trump seeming to win new followers each time he insults Hispanics or Muslims or claims that the wife of his main rival is less than appealing. It has become a qualifying point for candidates, a sign that they are of the people and transparent. Does this then mean the vast majority of voting  Americans harbor xenophobic and sexist views? Is this then a sign that American society has quietly grown increasingly less inclusive even as important progress in made in the fight against LGBT discrimination and the emergence of movements such as Black Lives Matter? Is this country destined for an eternal fight over the meaning of freedom? The tug of war over what constitutes social progress has allowed this contagion to infect American politics and the voting body. It has exploited a people weary of constant fighting and searching for simple solutions when there simply are none. It embraces the temptation of black and white thinking, in which conflict has a protagonist and antagonist. It is this attractive simplicity that has convinced many Americans that people like Trump and Cruz are authentic, transparent, and loyal to the people, although there is little indication that the claims of either man have been honest or practical.

The allure of firebrand language taps into emotions that may overtake reason. Such passionate followings are bound to create a stir, especially as American politics are frequently boring and the moderate position doesn’t attract nearly as impassioned a following.

For years, politicians and outsiders alike have responded to the disfunction of Washington with exasperation. “Enough is enough” has become a prevalent mantra both inside and outside Washington as definitive progress still seems elusive. The American people are saying so with much more urgency, and they are proving that they are willing to drastically alter the fabric of the country and burn bridges in the name of their frustration. Millions are banging at the door, led by loud candidates who wish to break down the government and start anew. As the fever reaches a new pitch, the need to make amends with the American people is as pressing as ever if government wishes to prevent the coup of moderate politics in the name of a dangerous extremism that threatens to tear the nation apart.

2 Comments on Political Correctness: A Catalyst for Populist Dissent in the 2016 Elections