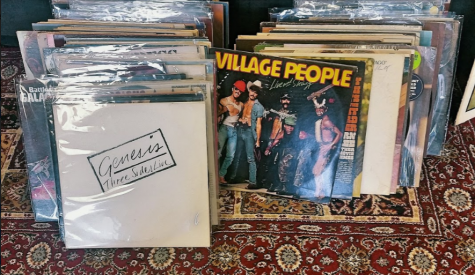 Countless rumors of an album have plagued overzealous Frank Ocean fans for the past four years, making his return both long-waited and nerve-wracking–but, of course, no one could predict his next work, or whether he would come back at all.

When he did with a sudden drop of a 17-song concept album rather unlike his previous album, channel ORANGE, Ocean essentially came back instantaneously, his album speedily gaining momentum as the days went on.

Released on August 20th of this year, the album was exclusively available on the iTunes Store and Apple Music. Some people, however, were lucky enough to live in the vicinity of the four pop-up shops Ocean set up in Los Angeles, Chicago, New York, and London. These shops held free magazines promoting Ocean’s latest piece, including physical copies of the album.

Interestingly enough, both the physical and digital copies held discrepancies dealing with tracklists and album covers, as each version contained something the other lacked. Depending on where one bought the album as well, the title differed between two spellings– Blond and Blonde.

Now, do these inconsistencies verge on careless production values, or do they serve a greater purpose?

For Ocean, every little detail matters. Two spellings, two forms, and two different tracklists preface a common theme that runs through his album: the characteristics of duality. Perhaps the distinctions allude to his bisexuality, or even something far more profound. Nonetheless, these seemingly small, yet ultimately calculated, decisions characterize Ocean as a genius of the musical form– a modern day Van Gogh trudging through the past four years carefully and meticulously creating, creating, creating.

What Ocean has created is a strange paradox of simplicity matched against immeasurable depth as a minimalistic sound quality plays against lyrical, structural, and topical complexity; the concept comes out as dreamy as it is elusive, thoughtful as it is bare-boned. Ocean trades in conventional R&B for an album only definable as avant-garde and completely his own, juggling clever nuances alongside the dualities of words and meanings.

The album begins with its lead single “Nikes,” filled with reverb and woozily distorted melodies. Although Ocean’s disguised vocals are almost unrecognizable in the track, his lyrics discuss a battle between love and materialism, a theme too human to ignore. Continuing with a theme of love, the next track “Ivy” displays the level of minimalism Ocean has taken to in producing Blond(e). Backed by echoing guitars, plucky keyboard notes, and the occasional vocal distortion, the songs remain void of any drum or synth-like beats normally characteristic of R&B. The lyrics bear the responsibility of carrying the heady emotion of the track as a vulnerable Ocean croons, “I thought that I was dreaming/ when you said you loved me.”

The third track “Pink + White” maintains definite influences from The Beatles and The Beach Boys as Ocean sings about adoration and true love. Also, the song features a background of angelic female vocal runs by none other than an uncredited Beyoncé, which adds another layer to Blond(e).

As a whole, the album features a lot of big names such as Beyoncé and Kendrick Lamar, but Ocean doesn’t name drop as a way to get certain songs more attention; the tracks are his and his own, focusing on his own voice. With huge success after the release of his debut album channel ORANGE, Ocean doesn’t need to add names to his tracks to get a few extra plays, either. (Of course, only Ocean would be able to call up Beyoncé and have her sing backup.)

In the fifth song “Solo,” Ocean sings about heartbreak and loneliness while he’s “gone off tabs of acid,” backed by a soft gospel-esque organ. Immediately, there’s a clear contrast between the subject of the song and the mood of the music. Ocean pits religion against substance abuse as his motto becomes “Inhale, in hell there’s heaven,” which truly expresses the duality seen in Blond(e). The dichotomy exists in the words, too. Here, “solo” refers to him being single but also “so low,” emphasizing how turning to drugs has helped make his life change from a personal hell to heaven. For senior Adrian Devoe, his favorite song off the album is “Solo.” He comments,“I love his vocals and the gospel like organ that encompasses the track to convey deep passion and emotion.”

Another track full of raw, unadulterated emotion is “White Ferrari,” the fourteenth track. With poignant, heart-rending lyrics, Ocean connects cars and driving around to his encounters of love, and the song plays like the backdrop of a dream. Senior Gabby Reid mentions, “The raw emotion of the vocals in White Ferrari gives me chills. I also really enjoy the bass and guitar riffs, snapping and harmonizing, it gives the song character, as well as his music style as a whole.” Meanwhile, the outro of “White Ferrari” has Ocean gently singing to his lover “But we’re so okay here/we’re doing fine” with a vulnerability previously unheard in the album.

For senior Priscilla Merlo, the gut-wrenching outro truly affected her. She discloses, “Honestly, the only instrument he needs is his voice. It holds so much emotion. ‘White Ferrari’ made me want to listen to the rest of the album.”

With the track “Siegried” following after, Ocean weaves together a jumbled, muddled narrative jumping from his love life to reflecting upon himself and his actions, then back outside of his love life. However, the sentiments shine through. Ocean thinks about settling down for “two kids and a swimming pool,” constantly interjecting his thoughts with the phrase “I’m not brave,” possibly grappling with his identity as a bisexual man. While Ocean fixes himself a sense of normalcy, he, finishes the song by repeating, “I’d do anything for you/ (In the dark),” ultimately staying away from what he’s defined as his conventional love.

Blond(e) rode on four years of a constantly building hype. Not only is it rare that an album lives up to high expectations, but that it is also doesn’t crumble from increasing pressure. As Ocean divulges the listener to the workings of his mind and bears all, Blond(e) even exceeds expectations through its complex structure and arrangement.

As a whole, senior Adrian Devoe believes Blond(e) “is way more emotional and way more expressive” in comparison to channel ORANGE. Devoe continues, “It represents his fears, emotions, and wants in a more upfront way that better showcases his vulnerability. The songs on this album I feel are more mellow and free, yet still structures like a contemporary R&B album– definitely one of the best albums of the year.”

Ocean has managed to craft an album that seemingly reveals all, but still holds the irresistible mystique known for his works, expressing how two opposites can marry together so well.

Whether it be another year or another four until another release, only one thing is certain: Frank Ocean is here to stay, and his fans will readily await the date of his next masterpiece.