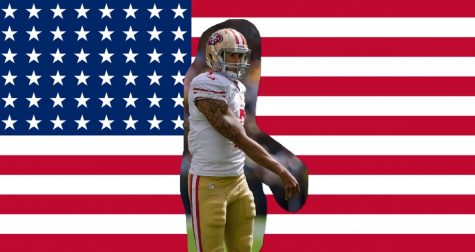 By: Saffron Sener | Editor in Chief

On August 26, 2016, Colin Kaepernick, quarterback for the 49ers, sat through a rendition of the “Star-Spangled Banner,” an anthem that is traditionally observed standing out of respect for the American flag. Triggering a storm of over-amplified outrage, misplaced anger, and utter hatred, Kaepernick utilized this action as a medium to protest the rampant and unpunished police brutality and oppression suffered by African Americans in this country.

This move, apparently revolutionary by many American’s standards, occurred to challenge “a flag for a country that oppresses black people and people of color.” Sparking shock across the United States, Kaepernick’s decision to sit through the national anthem has been revered by many as both disrespectful and treacherous. Taken as a blatant insult to the American flag and the entire U.S. military, as well as its veterans, Kaepernick’s refusal to stand has prompted a media onslaught of fury.

Kaepernick has more recently decided to kneel through the anthem’s recitation to clarify that he is not embarking on an attack against soldiers or veterans of the United States military. Through kneeling, which is a nod to those who fought for this country as well as still decidedly taking a stand, the NFL player has brought into conversation a topic that is typically too taboo for daily life. He has kneeled for every game since August 26th.

President Obama weighed in on the issue, explaining, “When it comes to the flag and the national anthem…that is a tough thing for them [men and women in uniform] to get past, but…he’s generated more conversation about issues that have to be talked about.” Emphasizing that it is Kaepernick’s constitutional right to sit or kneel through the national anthem, Obama defended the NFL player’s move.

On the flip side, Drew Brees, the New Orleans Saints quarterback, joined the reaction by tweeting, “I agree with his protest, I don’t agree w[ith] his method.” Journalist Adam Johnson brought attention to the fact that this statement is eerily similar to the very problem Martin Luther King Jr. addressed in his legendary “Letter From a Birmingham Jail.” King Jr. wrote “I have almost reached the regrettable conclusion that the Negro’s great stumbling block in his stride toward freedom is…the white moderate…who constantly says: ‘I agree with you in the goal you seek, but I cannot agree with your methods of direct action’’

Megan Rapinoe, a professional American soccer player who not only played in the Rio Olympics, but assisted in bringing the United States to victory during last year’s World Cup, was another of Kaepernick’s supporters. She currently is a member of the Seattle Reigns, and taking into account her amazing achievements, her presence in the soccer community is undeniable.

Kneeling during her team’s game against the Chicago Red Stars last week, Rapinoe demonstrated her support for Kaepernick’s move. Bringing a white, female, gay voice into the conversation, many have applauded her.

In an interview, she explained, “Being a gay American, I know what it means to look at the flag and not have it protect all of your liberties…it’s important to have white people stand in support of people of color on this.”

Rapinoe, as any other person who decides to kneel through the anthem, should be praised for trying to bring forward a sensitive topic.

However, in the aforementioned quote, she touches on a very true, yet very sad, reality. The fact that white voices are necessary for society to receive a topic with an open mind is heartbreaking. Where Colin Kaepernick endured unbelievable backlash from seemingly all possible persons, Megan Rapinoe earned praise as being a courageous and socially-knowledgeable citizen.

This only outlines the fact that if a black man, in any degree, decides to raise his voice against this country, he is deemed treasonous. A harsh reality to digest, the evidence is indisputable; the name Kaepernick, for many, is now synonymous with unpatriotic or veteran-hating, in many cases both.

Senior Lauren Hill commented, “I have mixed feelings towards this situation because I support his message and his right to sit, but it appears his actions were reflected poorly onto his cause. It made his decision less about what he believed in and gave an excuse to people who opposed what he was saying to discredit him and others who are anti-police brutality make his actions and thereby his views anti-American rather than anti-violence.”

The anti-American label has fastened itself to Kaepernick as the uproar intensifies. Numerous fans have taken to social media to post videos of themselves burning their Kaepernick jerseys out of patriotic hatred. (However, and interestingly, the sale of Kaepernick jerseys has also skyrocketed on the NFL online store, with the player’s merchandise quickly becoming the highest-selling item in all variations)

Former NFL player Rodney Harrison commented on Kaepernick’s racial background, being that he is half-black and half-white, stating, “I’m a black man. And Colin Kaepernick—he’s not black. He cannot understand what I face and what other young black men and black people face, or people of color face, on a [daily] basis.”

Donald Trump, as per expected, attacked Kaepernick’s attachment to the U.S. “[He] should find a country that works better for him,” the presidential candidate noted.

Tomi Lahren, a hyper-conservative host for The Blaze, dubbed Kaepernick a “whiny, indulgent, attention-seeking crybaby,” before asking, “when will those in black communities take a step back and take some responsi-damn-bility for the problems of black communities?” Mind you, she never once mentioned the police brutality Kaepernick was protesting.

Mocked for being bi-racial, willing to enact a right given to him at birth, and stand up for his beliefs, Kaepernick has withstood fury and prejudice from anyone who serves it.

What many fail to notice, however, is the actual reason Colin Kaepernick sat out–the cause for the protest. Little focus was brought to the topic at hand; conversation has merely discussed the blasphemous act by which Kaepernick thrust himself into the public eye and attracted the wrath of throngs of Americans.

One should not dwell on Kaepernick’s action, but rather why he protested. In all seriousness, the heart of this problem is not disrespect of the national anthem. It is an intrusive and suppressive refusal to talk about the ever-present oppression of black people in this country. Shea Donnelly, a senior, disclosed, “I think that as an American citizen, veterans died for his right to free speech and that the argument he is trying to make is being swept to the side. That fact that people are freaking out about it being disrespectful more than caring about the innocent lives lost that he’s trying to highlight shows how little progress we’ve made as a country.”

Colin Kaepernick strategically brought the existence of this oppression to the minds of a far wider audience than would consider it otherwise; once the deluded anger over respect of the national anthem has ebbed, the root of the problem will be left.

Then the real dilemma can be addressed. This country’s prejudice towards minorities in every sense, especially of race, has tainted its history since 1776. Progress has been made to battle America’s hamartia; Kaepernick is simply one of many attempting to usher in the next phase of national development.

That’s what should be remembered from this event, not someone flexing their constitutional right to sit while a string of words is sung before a football game, but an inescapable and All-American oppression.
Colin Kaepernick, and the voice of every African American, deserves to be heard. Now is the time: Kaepernick has started the conversation. It’s left to us to maintain it.

3 Comments on Avoiding the Anthem: A Protest of All-American Oppression